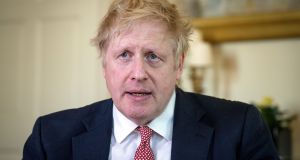 Calls for an exit plan to end the lockdown intensified in the UK as questions emerged about the British government’s preparedness during the build-up to the deadly coronavirus outbreak.

British prime minister Boris Johnson missed five meetings of the government’s key Cobra committee as the health crisis was gathering pace, according to a report in The Sunday Times.

The claims came as Mr Johnson, who is recovering from coronavirus, was said to have been giving directions to ministers from the country retreat of Chequers, where he is recuperating.

The report that Mr Johnson did not attend a raft of Cobra meetings and claims the government missed a series of opportunities to try and lessen the impact of the outbreak in February and March drew a pointed response from Downing Street.

A Number 10 spokesman said: “The prime minister has been at the helm of the response to this, providing leadership during this hugely challenging period for the whole nation.”

The comments came as controversy continued to grow over the insufficient levels of personal protection equipment (PPE) for frontline NHS staff, and criticism that not enough people in Britain were being tested for the killer virus.

The new leader of the British Labour party Kier Starmer accused the UK government of dragging its feet in dealing with the pandemic.

Writing in the Mail on Sunday, Mr Starmer said: “The Government was too slow to enter the lockdown.

“It has been too slow to increase the number of people being tested.

“It has been too slow in getting NHS staff the critical equipment they need to keep them safe. We need to make sure these mistakes are not repeated.

“Other countries have begun to set out a road map to lift restrictions in certain sectors of the economy and for certain services, especially social care, when the time is right.

“This of course must be done in a careful, considered way with public health, scientific evidence and the safety of workers and families at its heart. But the UK Government should be doing likewise.”

The remarks came as the Mail on Sunday reported British ministers are finalising a three-stage “traffic light” plan that would see outlets like DIY stores and garden centres reopen, and some pupils go back to school in mid-May.

The Sunday Telegraph said that Mr Johnson was in better form and had been “giving orders” to Britain’s first secretary of state Dominic Raab, who is deputising for him in public, as well as senior aides this week.

This paints a different picture of the prime minister to the one depicted in the Sunday Times in the run-up to the outbreak, as the newspaper quoted a senior Downing Street aide, who was not named, saying: “There’s no way you’re at war if your PM isn’t there.

“And what you learn about Boris was he didn’t chair any meetings. He liked his country breaks. He didn’t work weekends.

“It was like working for an old-fashioned chief executive in a local authority 20 years ago. There was a real sense that he didn’t do urgent crisis planning. It was exactly like people feared he would be.”

A Downing Street spokesperson said: “The government has been working day and night to battle against coronavirus, delivering a strategy designed at all times to protect our NHS and save lives.

“Guided by medical and scientific expertise, we have implemented specific measures to reduce the spread of the virus at the time they will be most effective.

“Our response has ensured that the NHS has been given all the support in needs to ensure everyone requiring treatment has received it, as well as providing protection to businesses and reassurance to workers.”

However, medial care staff have expressed alarm as surgeons are being advised “not to risk their health” by working without adequate PPE amid fears that hospitals could run out of supplies.

The Royal College of Surgeons of England (RCS) said it was “deeply disturbed” that medics could be asked to reuse items or wear different kit when treating Covid-19 patients.

Healthcare staff treating positive patients have been given guidance that they should wear long-sleeved disposable fluid-repellent gowns but, because of shortages, they have just been advised they could be asked to reuse PPE or wear aprons.

The fear from medics comes as more than 15,000 patients have now died in hospital after testing positive for the disease in the UK, with thousands more deaths expected in care homes.

Professor Stephen Powis, the national medical director of NHS England, told a Downing Street briefing that it was “absolutely critical above everything else” that supplies were delivered to the front line so the guidance on on wearing gowns could be followed.

“I know government is working incredibly hard to get those procurements in as you have heard,” he said on Saturday. – PA