UK Labour deputy leader Tom Watson, who has been critical in the past of efforts to deal with anti-Semitism in the party, posted a video after seven Labour MPs resigned the party, saying he recognised issues in the party. Video: Tom Watson 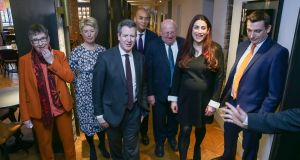 Britain’s Labour Party leader Jeremy Corbyn has been warned he faces more resignations by MPs unless he gets a grip of the problem of anti-Semitism within the party’s ranks.

Party chairman Ian Lavery faced an angry backlash at a stormy meeting on Monday of the Parliamentary Labour Party (PLP) after seven MPs earlier announced they were quitting in protest at Mr Corbyn’s leadership.

Labour sources said Mr Lavery stressed the leadership’s commitment to rooting out anti-Semitism at what was described as a “heated” behind-closed-doors gathering at Westminster.

But his claims were greeted with derision by some of those present with accusations that he failed to understand the “enormity” of the problem.

The clashes came at the end of a day which saw seven MPs walk out of the party, condemning Mr Corbyn’s stance on Brexit as well as his handling of the anti-Semitism issue, in potentially the most significant split in British politics for a generation.

Chuka Umunna, Chris Leslie, Luciana Berger, Mike Gapes, Angela Smith, Gavin Shuker and Ann Coffey said they would be sitting as an new Independent Group in the Commons and urged MPs — from Labour and other parties — to join them.

The response from shadow chancellor John McDonnell was to call on the MPs to do “the honourable thing” and stand down from Parliament to contest by-elections.

But at the PLP, a number of MPs turned their fire on the leadership after Ms Berger, who is Jewish, told a press conference she was ashamed to be a member of a party which was “institutionally anti-Semitic”.

Mr Lavery was said to have have expressed anger at the claim, saying that if the party was anti-Semitic he would not be a member.

But he was challenged by other MPs who said he showed no understanding of the scale of the problem.

In an emotional intervention, Jewish MP Ruth Smeeth said she and another Jewish MP, Louise Ellman, had been told by a party member they did not have “human blood”, but no action had been taken against the individual concerned.

Afterwards Ms Ellman said. “It was appalling. He (Mr Lavery) showed no understanding of the enormity of what is going on.”

Ian Austin, a long-standing critic of Mr Corbyn’s leadership, said Mr Lavery’s performance had only made the situation worse.

“The party has got to show it is tackling anti-Semitism. I don’t think he came close to demonstrating the leadership understand the scale of the problem we have,” he said.

“I think it will result in people thinking long and hard about their position in the party.”

Another MP left the meeting saying: “It was a complete and utter waste of time - a dialogue of the deaf.”

A party source said Mr Lavery had spelt out the measures being taken to deal with the “appalling abuse”.

“Ian Lavery spoke about the party’s traditions as a broad church, in which there is a wide range of opinions, but we work together to build a brighter future for millions of people and transform our society,” the source said.

“He made clear the party’s absolute determination to root out anti-Semitism and the work that is being done to improve procedures to tackle this appalling abuse.”

Earlier however, deputy leader Tom Watson — who has been critical in the past of efforts to deal with anti-Semitism in the party — said he feared there could be further resignations.

“I confess I feared this day would come. And I fear now that unless we change, we may see more days like this,” he said.

He called on Mr Corbyn to reshuffle his frontbench team so it better reflected the balance of opinion in the PLP where many MPs reject the leader’s left-wing agenda. - PA