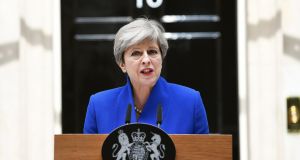 UK prime minister Theresa May has made clear she wants support from her “friends and allies” in Northern Ireland’s DUP. Photograph: Andy Rain/EPA

British prime minister Theresa May’s grip on power following the UK general election appears far from secure, despite a proposed deal with the Democratic Unionist Party (DUP) to support her in parliament.

Downing Street said on Saturday an outline agreement on a “confidence-and-supply” arrangement had been reached with the DUP that will be put to the cabinet for discussion on Monday.

But the strength of that deal looks set to be tested when the House of Commons meets next week, with British Labour leader Jeremy Corbyn vowing to try to bring down the British government by defeating Ms May in parliament, and insisting: “I can still be prime minister.”

Sunday papers also reported that Boris Johnson was being encouraged to make a Tory leadership bid in an effort to oust Ms May, claims strongly disputed by the British foreign secretary’s office.

The 10 DUP MPs could provide crucial support for the Conservatives on key votes, after Thursday’s snap election saw Ms May lose control of the House of Commons.

A “confidence-and-supply” arrangement is a far looser deal than a formal coalition.

It would mean the DUP backing the British government on its budget and confidence motions, but could potentially lead to other issues being decided on a vote-by-vote basis.

Ms May needs to shore up her position in parliament because the Queen’s speech setting out the British government’s programme is due on June 19th, with a highly significant vote on its content expected after a few days’ debate.

Mr Corbyn told the Sunday Mirror he would oppose the government all the way.

“I can still be prime minister. This is still on. Absolutely,” Mr Corbyn said.

The potential deal with the DUP came after Ms May sent chief whip Gavin Williamson to Belfast for talks after the election left the Tories eight seats short of the 326 required for a majority.

Following the announcement of the proposed arrangement, Sinn Féin accused the DUP of betraying the interests of Northern Ireland by agreeing to support a minority government headed by Ms May.

The republican party’s leader at Stormont, Michelle O’Neill, predicted the deal between the Tories and the DUP would “end in tears”.

Highlighting Conservative austerity cuts and its stance on Brexit, Ms O’Neill claimed the DUP link-up with Ms May would spell bad news for Northern Ireland, a region that voted for Remain in last June’s EU membership referendum.

There is also unease within the Conservatives about the link-up with the DUP, which strongly opposes same-sex marriage and abortion.

Scottish Tory leader Ruth Davidson said she had demanded a “categoric assurance” that LGBTI rights would not be affected by a deal with the DUP.

The news of the deal follows the resignation of Ms May’s two closest aides, Nick Timothy and Fiona Hill, who quit after coming under intense pressure from Tories following the election result.

Former minister Gavin Barwell, who lost his seat in Thursday’s election, was named on Saturday as the new chief of staff, a role previously held jointly by Mr Timothy and Ms Hill.

In a resignation statement on the ConservativeHome website, Mr Timothy acknowledged regrets over the way Ms May’s social care policy, dubbed the “dementia tax” by critics, had been handled.

But he also set out his concerns about the way the campaign was managed, in comments viewed as a swipe at election guru Lynton Crosby.

In her statement, Ms Hill said: “I have no doubt at all that Theresa May will continue to serve and work hard as prime minister and do it brilliantly.”

Ms May had claimed she called the election as she wanted a stronger hand in the forthcoming Brexit negotiations, due to start on the same day as the Queen’s speech.

Without a majority in the House of Commons, she could be forced to seek consensus on the approach she takes to Brexit, potentially by performing a U-turn on issues such as single market membership.

Ms Davidson, who wields considerable influence after the Scottish Conservatives won 13 seats in Thursday’s vote, said: “I want to ensure that we can look again at issues like Brexit, which we know we are now going to have to get cross-party support for. And move to a consensus within the country about what it means and what we seek to achieve as we leave.”

Ms May is working on a cabinet reshuffle, which is expected to be limited as the election result means she cannot afford to have disgruntled former ministers sniping at her from the backbenches.

Former Tory minister Lord Barker said there was little appetite for a Tory leadership contest, but told BBC’s Newsnight that the prime minister was a “terrible campaigner” and “there’s clearly not going to be another election with Theresa May at the head”.

Sources close to Mr Johnson dismissed reports he was plotting a leadership bid as “complete bollocks” and suggested “someone is trying to make mischief”.

The Mail On Sunday has reported a close ally of Mr Johnson as saying it was “go go go” for a leadership bid, adding: “We need Bojo.”

The Sunday Times said Mr Johnson had been pressed by five cabinet colleagues to oust Ms May.

An ally of Mr Johnson told the newspaper: “We are facing a populist and they have realised we need someone who can talk to the people.We need a Brexiteer. Boris is the only option with the liberal values, Brexit credentials and popular appeal.”

A spokesman for Mr Johnson said: “The foreign secretary is 100 per cent supporting the PM and working with her to get the best deal for Britain.”