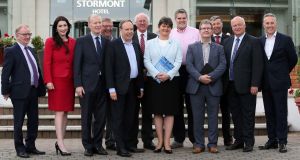 DUP leader Arlene Foster with her members of parliament outside the Stormont Hotel in Belfast. Photograph: Paul Faith/AFP/Getty Images

A deal between the Conservatives and the Democratic Unionist Party to allow Theresa May to govern as prime minister would be “bad news” for women given the party’s opposition to relaxing Northern Ireland’s strict abortion laws, opposition politicians have warned.

Labour MP Jo Stevens said the prospect of Ms May’s party doing a deal with the DUP was “chilling”, after Tory former cabinet minister Owen Paterson said his party may have to enter “a debate I suppose on further reduction of abortion times as medical science advances”.

Green Party deputy leader Amelia Womack said the DUP’s stance on abortion had left women in Northern Ireland in “dire circumstances” and described the potential tie-up with the Conservatives as a “coalition of cruelty”.

The DUP wants no extension to Northern Ireland’s limitations on terminations, which restrict the procedure to when a woman’s life is at risk or there is a permanent or serious risk to her mental or physical health.

As it stands, fatal foetal abnormalities, rape and incest are not grounds for an abortion.

After hearing of Mr Paterson’s comments on BBC Radio 4’s Today programme, Ms Stevens tweeted: “This is just 1 reason why Theresa May doing a deal with #DUP is chilling.”

This is just 1 reason why Theresa May doing a deal with #DUP is chilling @labourwomen @bpas1968 @Abortion_Rights https://t.co/2B0KrMbsBk

Ms Womack said: “The Tory-DUP coalition of cruelty is bad news for women. We may have seen a record number of women gain seats in the parliament this week, but the 10 MPs of the anti-abortion, anti-equal marriage DUP look set to have a disproportionate influence which should concern us all.

“The DUP’s obstruction to legal abortion in Northern Ireland has left many women in dire circumstances, forced to travel to England where they are not entitled to NHS-funded terminations or face prosecution for seeking help at home.

“It is deeply concerning that a party responsible for so much pain could be in a position to exert so much influence.

“Women’s rights are under threat and we must work together to stop a lurch to the right under a Tory-DUP alliance.”

Katherine O’Brien, of BPAS, said: “The very idea that abortion rights could be used as a bargaining tool as part of these negotiations is deeply worrying.

“Owen Paterson needs to get up to speed, fast: we are a pro-choice country which supports a woman’s right to choose and one where parliament recently voted for the decriminalisation of abortion up to 24 weeks.

“Our politicians should be focused on improving abortion access, including decriminalisation and NHS funding for women in Northern Ireland, not trading away our hard-earned rights in a backroom deal.”