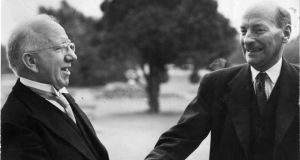 Clement Attlee, the Labour prime minister whose government founded the welfare state, looked after a child refugee who escaped from the Nazis in the months leading up to the second World War, the Guardian has reported.

The then leader of the opposition sponsored a Jewish mother and her two children, giving them the confidence and authorisation to leave Germany in 1939 and move to the UK.

After their escape, Mr Attlee invited one of the children into their home in Stanmore, north London, testimony and letters show. He neither publicised nor sought to make political capital from his visitor.

Paul Willer, the former child refugee who is now 90 and living in Gloucestershire, was 10 when he stayed with the Attlees for four months until the beginning of the war.

He has arranged to meet Mr Attlee’s granddaughter for the first time on Wednesday at the 80th anniversary of the Kindertransport scheme, which saved thousands of mainly Jewish children from Nazi Germany.

Speaking from his home in South Cerney, Mr Willer said the Attlees, along with others, helped his family escape the Holocaust and forge new lives in the UK. “It was a remarkable kindness, a generous offer.

“Attlee was a modest man. He did not try and glorify himself in any way. He did it for the right reasons.”

Mr Willer was raised with his younger brother by his Jewish mother Franziska in the Bavarian town of Wurzburg. Their father Johannes, a Christian, left their mother in 1933, began a new relationship and declared himself to be a Nazi sympathiser.

Mr Willer’s mother, a doctor, struggled to find work and look after her children. She decided she must leave Germany after witnessing the anti-Semitic violence of Kristallnacht, or “night of broken glass”, on November 8th, 1938.

She wrote in her memoirs that she was warned by an acquaintance: “They have smashed all the Jewish shops, burnt the synagogue, raided the Jewish households and taken all the men to concentration camps.”

Her plan was for all three to escape to London while she would retrain as a midwife. But with no money, and with rules forbidding midwives to keep children in hospital accommodation, she could only leave if she found someone to guarantee they would look after her children, her letters said.

The family was advised that because the children were seen as “half Aryan”, they might struggle to qualify for the Kindertransport scheme which helped mainly Jewish children.

Seeking an alternative offer of assistance in the UK, Mr Willer’s mother wrote to a German church official in January 1939: “I am in such despair and so despondent that I can’t see a way out,” she wrote.

A faint hope eventually came after her London-based brother Otto contacted the Rev William Hewett, the rector of Stanmore, who then found two local families willing to take a boy each.

One of these families was the Attlees, who were regular churchgoers and occupied Heywood, a beautiful home with a walled garden in northwest London.

At that time, Mr Attlee was 56 and had been the leader of the Labour Party for four years. Europe was sliding closer to war and Labour was opposing the policy of appeasement being pursued by the prime minister Neville Chamberlain.

Mr Willer’s mother said in her memoirs that she used the offers to persuade border guards to let her cross from Germany into the Netherlands and then on to the UK.

Mr Willer told the Guardian he remembered the encounter for another reason. “I was proud of my watch, it was a present with luminous hands. One of the German guards on the Dutch border saw it after he boarded our train.

“The guard said to me, ‘I am sure you would like to hand it over as a gift to the Führer. If you give it me, I will make sure he gets it.’ So I had to hand it over. After they left, my mother told me that we were safe, safe from the Nazis.”

Mr Willer said he arrived in London wide-eyed at cars driving on the wrong side of the road. His uncle took him to Heywood on Easter Sunday 1939 where he was introduced to Attlee, his wife Violet and their four children.

“They took me inside what was a very large house. They had a maid and a cook too. The next morning their son Martin [the late Lord Attlee], who was my age, took me upstairs and ran a cold bath, bathed, and encouraged me to do the same. I thought, ‘Is this what they do for Easter?’ It turned out that cold baths were what the males in the family did every day,” he said.

At first, Mr Willer found it difficult to communicate with the Attlees – he spoke no English and they understood no German. Mr Attlee’s daughter Felicity became the family’s translator because they had both learned basic Latin at school, he said.

Mr Willer became fascinated by the letters that came to Mr Attlee’s home from across the world and would go with the children to Sunday school.

During Mr Willer’s stay, Mr Attlee was formulating Labour’s policy to oppose Hitler’s advances towards the Sudetenland, a policy which led him to cast doubt upon Mr Chamberlain’s Munich agreement and claims of “peace in our time”.

In contrast to the taciturn, blunt image of Attlee the politician, Mr Willer’s lasting impression was of a happy, relaxed presence, he said.

“He was a gentle man and a gentleman. He was very good with the children and affectionate. At breakfast, we would gather around the table and he played this game where he held out a coin and asked whose monarch’s head was on it. Whoever gave the correct answer was allowed to keep the coin,” he said.

Just before the declaration of the war in September 1939, Mr Willer said goodbye to the Attlees and was sent to a school in Northern Ireland. He eventually became a sales director in a textiles firm, married, had three children and settled in Hertfordshire.

Mr Willer’s mother’s memoirs, which were written in 1965 and refer to the Attlees, are being kept by the Wiener library in central London. She died 10 years ago. Mr Willer’s father, with whom he had no contact since his parents’ estrangement, died by suicide in 1964.

Mr Attlee, went on to lead Labour to a landslide election in 1945, undertook an ambitious nationalisation programme and established the National Health Service. He also oversaw the partition of India and ended the UK mandates of Palestine and Jordan. He died in 1967.

Mr Willer will renew his bond with the Attlee family on Wednesday at the 80th anniversary of the Kindertransport organised by the Association of Jewish Refugees.

“It will be an emotional afternoon,” she said. – Guardian