Chilling Brexit report might send MPs running to a ‘Norway plus’ 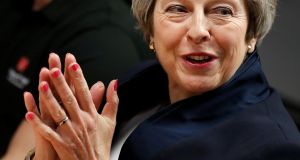 Theresa May during her visit to Scotland on Wednesday. MPs will hold a crucial vote on December 11th to approve or reject the Brexit deal agreed with EU leaders. Photograph: Russell Cheyne/AFP/Getty Images

The Bank of England’s chilling analysis of the possible impact of a no-deal Brexit, which followed a similar report from the treasury, drew a predictable response from Brexiteers who accused Mark Carney of reviving “Project Fear”.

“It is unusual for the Bank of England to talk down the pound and shows the governor’s failure to understand his role. He is not there to create panic,” Jacob Rees-Mogg said.

Earlier, chancellor Philip Hammond admitted that Britain would be poorer under any Brexit scenario, including Theresa May’s deal, than if it were to remain in the EU. Both the treasury and the Bank of England conclude, however, that the prime minister’s deal is among the least damaging forms Brexit could take.

“What we see behind the analysis that we have published today, and indeed the chancellor recognised it this morning, is that our deal is the best deal available for jobs and our economy that allows us to honour the referendum and realise the opportunities of Brexit,” May said during prime minister’s questions.

With dozens of Conservative MPs promising to join the DUP and the opposition parties in voting against the prime minister’s deal, its chances of being approved in a “meaningful vote” on December 11th appear to be negligible. And the less the deal appears likely to pass, the smaller is the incentive for wavering MPs to support it.

Looking for an excuse

Wednesday’s warnings about the impact of a no-deal Brexit could offer cover to undecided MPs, particularly on the Conservative benches, who are looking for an excuse to support the government. And they will almost certainly influence what happens next if May’s deal is rejected next month.

Jeremy Corbyn said on Wednesday night that Labour will table an amendment to the meaningful vote to prevent a no-deal Brexit. The amendment would resolve “to pursue every option that prevents the United Kingdom’s either leaving the European Union without a withdrawal agreement or leaving on the basis of the negotiated withdrawal agreement laid before the House”.

Shadow chancellor John McDonnell said on Wednesday that a second referendum was inevitable if Labour failed to trigger a general election after May’s deal is rejected.

With Brexiteers alarmed by the prospect of a second referendum and everyone else spooked by the idea of a no-deal Brexit, the chatter at Westminster about “Norway plus” is becoming louder.

This option, promoted by Conservative MP Nick Boles, would see Britain accepting the withdrawal agreement but then seeking to remain in both the European Economic Area and the customs union.