Caring for a nation: recognising the contribution of Irish NHS workers

Irish nurses, doctors and administrators in the NHS to be honoured during the presidential visit 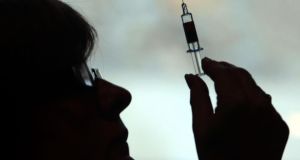 The number of overseas-born nurses in British hospitals this year will reach an all-time high of 50,000. Photograph: David Cheskin/PA

Fifteen years ago, Sharon Lynagh from Athboy, Co Meath, who is now a ward sister at University College Hospital, London, was one of 90 Irish students out of a 140-strong nursing class at a hospital in south London.

It was a journey made by tens of thousands over the generations – a journey that will be honoured next week by President Michael D Higgins when he pays tribute to “the Irish of the National Health Service”.

Irish nurses were already embedded in British hospitals before the creation of the NHS in 1948, though the numbers increased substantially in the years afterwards due to the lack of opportunities at home and better wages in England.

By 1971, one in eight nurses in British hospitals was an Irish national. By the late 1990s, however, half of the Irish nursing students who sat with Sharon Lynagh in St George’s Hospital in south London had returned home.

In the years immediately before Ireland’s economic crash, Ireland became “one of the most active recruiters of nurses in the English-speaking world”, according to a Royal College of Nursing study.

In 2006/7 fewer than 100 Irish nurses registered in the UK. Three years later, the number had gone up to 400. Today, the number is significantly up on that – though Australia and Canada are attractive, too.

Hundreds of staff in the hospital trust are Irish: “It’s a great place to work, they have given me more opportunities than I would have got anywhere else,” says Liz McBrinn, a physiotherapist who works with children in UCH’s state-of-the-art Macmillan Cancer Centre.

The leader of the hospital trust’s team that built the hospital, Kieran McDaid, from Strabane, Co Tyrone, last year received an award for the building, while the head of Macmillan is another Irishman, Ciarán Devane.


Irish welcome
“Dia dhuit,” said McDaid yesterday with a grin. “We’ll have to get everybody around here speaking Irish next week.”

The President, during his visit to UCH next Tuesday, will meet with today’s NHS Irish generation, but also those who served in earlier decades – the years for many patients “of the Irish matron”.

Matron Josie Gladney, who is from Co Carlow and who came to work in the hospital in 1992, speaks with pride of her predecessors: “They were incredibly well-trained, very professional, all of them, and left behind an incredible legacy.”

“A lot of patients, then and now, feel very reassured to be cared for by Irish nurses and doctors. Sometimes it is about the softness of accent,” she said, to nods of agreement from a Connemara-born colleague, Paula O’Brien.

The reach of the Irish is illustrated by Cork-born consultant obstetrician Pat O'Brien, who was on the medical team that cared for Cork woman Angie Benhaffaf and her conjoined twins, Hassan and Hussein, when they were born four years ago.

“I was the obstetrician. The neo-natal nurse was from Cork and the surgeon who separated the twins at Great Ormond Street Hospital was also from Cork. So it made everybody feel at home,” he said.


Overseas nurses
Today, UCH and other hospitals are recruiting in Ireland and elsewhere to fill gaps in the NHS. The number of overseas-born nurses in British hospitals this year will reach an all-time high of 50,000.

British ministers are soon to sign an agreement with India to recruit 6,000 of its nurses. Last year, 5,000 Spaniards came to staff wards in British hospitals.

If anything, the demand for Irish by all parts of the NHS will only grow, particularly given that English language tests are to be more strictly enforced.

The number of GPs working for the NHS is continuing to rise at a faster rate than the number of UK-trained GPs – partly because newly qualified are less than keen for life in general practice.

Emma Kelly from Belmullet, Co Mayo, offered to work an extra long day next week to get a place at the presidential visit: “It’s very exciting,” she said.

The complexity of Ireland’s history at home is reflected, too, in UCH. “I’m Northern Irish, Irish and British,” says the Belfast-born Michael Patterson, UCH’s newest consultant, “And, for me, the President’s visit is hugely significant.”

Patterson’s mother is a Catholic from the Republic, his father a Northern Protestant. They met when he went to Dublin to study in Trinity, bringing up their son to “have a broad view on Irish politics and history”.

“It is great to see the Irish diaspora being recognised in this way. Hopefully, my mother will be incredibly proud. I may never get to meet a pope, but I might get to meet President Higgins,” said Patterson, with a smile.

Please visit http://www.uclh.nhs.uk/wwus if you would like to find out more about job opportunities at UCLH. If you are a nurse, please contact UCLH Nurse Recruitment Lead, Donna Beck, on Recruit.500@uclh.nhs.uk