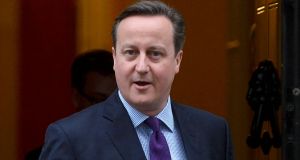 Britain’s prime minister David Cameron: “Never been my intention to strong-arm people into voting for a position they don’t agree with.” Photograph: Reuters

Conservative Eurosceptics have welcomed David Cameron’s decision to allow cabinet ministers to campaign on either side of Britain’s referendum on EU membership. But a leading pro-European in his party said the move reflected the prime minister’s weakness, comparing him to his predecessor John Major and to Labour leader Jeremy Corbyn.   The prime minister told the House of Commons that, after Britain concludes its renegotiation with EU partners, his government would adopt a position on whether to recommend voting to remain in the EU or to leave. Individual ministers would, however, be allowed to campaign “on a personal basis” against the government’s position.

“There are people who have long-standing views about the European issue and . . . it’s never been my intention to strong-arm people into voting for a position they don’t agree with,” Mr Cameron said.   The prime minister said last January he would not allow cabinet ministers a free vote in the referendum but he has come under increasing pressure to change his mind or risk a number of high-profile resignations.

Former chancellor Ken Clarke said Mr Cameron was repeating Mr Major’s mistake in seeking to appease Eurosceptics, adding that the prime minister now faced the same fate as Mr Corbyn, who has been in open disagreement with members of his shadow cabinet.

“It’s most unfortunate that David is really now seeing the beginning of what is going to be a very difficult task for him to avoid splitting the party as he goes into this referendum campaign. Collective unity is now collapsing in government and shadow government on different subjects,” Mr Clarke said.   “David probably has been forced into it because one or two of them are obviously already briefing the newspapers and have been for some time. It is extremely difficult because it is just like Jeremy Corbyn. He will have people who are openly challenging the policy of the government on the political future role of this country in the world.”

Mr Cameron hopes to conclude his negotiations at an EU summit in Brussels next month, opening the way for a referendum as early as June. The prime minister maintains that he has yet to make up his mind on how to recommend that Britain should vote. But he told MPs yesterday that Ireland’s view would have a “very big” influence on his decision, adding that Taoiseach Enda Kenny has been among Britain’s strongest supporters during last month’s EU summit.

“He made a brilliant speech at the European Council, for which I will be forever very grateful. Because, of course, the Republic of Ireland wants Britain to stay in the European Union because all sorts of difficult issues would arise in terms of the Border and other things if we were outside. And, of course, the Republic of Ireland sees Britain as a strong voice in Europe for many of the things that it believes in.

“But look, we have to get this deal right and then we need to bring all the arguments to bear on both sides of the case and I think that what those in the Republic and indeed in Northern Ireland say will make a very big determination,” Mr Cameron said.

Former defence secretary Liam Fox, a leading Conservative Eurosceptic, welcomed the prime minister’s decision to allow ministers a free vote in the referendum, expressing confidence that the party could “handle the passions and arguments that will be aroused” by the vote.   Mr Cameron, who is expected to recommend remaining in the EU, told MPs that he will not resign as prime minister if he loses the referendum.   “Come what may I will continue to lead the government in the way I have,” he said.