‘Business as usual’ with Russia no longer possible, says expert 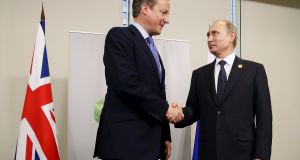 British prime minister David Cameron with Russian president Vladimir Putin in 2014: “We are not facing a cold war but we are definitely facing an entrenched position from both sides,” Dr Jonathan Eyal, international director at the Royal United Services Institute has said. Photograph: David Gray/Reuters

The revelations of the Litvinenko inquiry will be “potentially very damaging” for relationships between Britain and Russia and make any chance of “business as usual” almost impossible, an expert has predicted.

During a tense meeting yesterday with the Russian ambassador to Britain, Europe minister David Lidington expressed the British government’s “deep concerns” about the findings, saying they demonstrated a “flagrant disregard” for UK law.

But ambassador Alexander Yakovenko rejected the report’s findings as “absolutely unacceptable”, calling it a “gross provocation of the British authorities”.

Relations between London and Moscow are likely to have soured to the point where any kind of co-operation on intelligence or counterterrorism issues would be extremely difficult, Dr Jonathan Eyal, international director at the Royal United Services Institute (Rusi), suggested. Dr Eyal said the government may have previously resisted an inquiry because of the swathe of intelligence needed for it and the danger of burning bridges with Moscow.

But following the invasion of Ukraine last year, ministers may have decided there was “very little to lose”. He said: “The inquiry has indicated that not merely are the culprits agents of the Russian state, but that this was no rogue operation, but one authorised at the highest level, at the level of the president of Russia.

“It reduces the scope for any potential dialogue between London and Moscow. It would allow, of course, continued political dialogue but it would make it very difficult to consider any intelligence or counterterrorism co-operation or any kind of joined activities.”

Restoration of a normal relationship between the two countries was limited, Dr Eyal said, with the two countries now facing an impasse and Britain continuing to call for extradition of the two main suspects, Andrei Lugovoy and Dmitry Kovtun, despite there being “no chance whatsoever of that happening”.

Dr Eyal said: “We are not facing a cold war but we are definitely facing an entrenched position from both sides.

Mr Litvinenko’s widow, Marina, has called for economic sanctions and a travel ban on Russian president Vladimir Putin and the expulsion of intelligence operatives at the London embassy, but Dr Eyal believes such calls are “misplaced” and unlikely to succeed.

Sanctions would have to eclipse those already imposed on Russia over the war in Ukraine and would likely need Europe-wide support, which it is unlikely to get for what is a “bilateral matter”, he suggested. But he said the inquiry had been successful in analysing how Mr Litvinenko met his death, bringing some satisfaction for his widow and showing Mr Putin “we know far more than he would like us to know”.

The murder left behind “more tracks than almost any petty criminal would have”, identifying Russia’s security services as “basically incompetent” and the country as “a state which authorises outside assassinations”, he said.– (PA)