Visitors to the UK spend on average £1,200, much of it on goods that attract luxury taxes in their own countries 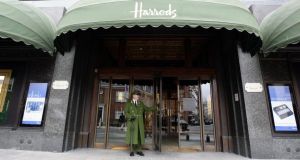 A doorman outside the Harrods department store in London. The store is a regular visiting place for tourists looking to buy luxury goods.

Chatham Place in Hackney in East London has a collection of local authority flats along its length, which makes the sight of lines of Chinese tourists, dangling cameras and shopping bags as they search for Burberry’s factory shop, all the more incongruous.

The luxury brand gets more than 600,000 visitors a year at its outlet store far off the beaten track, including tens of thousands of wealthy Chinese.

Despite the current febrile atmosphere surrounding the topic of immigration into the UK, VisitBritain is trying to entice more people to make short visits to its shores.

Last year, a group of business people involved in retail in Britain, including those representing Harrods, Selfridges, Westfield shopping centre, the Burlington Arcade, and designer outlets such as Bicester Village in Oxfordshire, went to Shanghai to promote their offerings.

The Chinese are shoppers worth welcoming: on average each spends £1,200 (€1,420) during a visit, much of it on goods that attract luxury taxes at home. Chinese men, apparently, are particularly partial to watches, bags and Clarks shoes.

Those shoppers can even use their Chinese UnionPay cards – the equivalent of a Visa card – at increasing numbers of terminals in shops throughout the city.

The shopping is expected to be a significant attraction. One in five of all first-time tourists puts visiting Harrods on their top five list of things to do, with even higher figures reported from those visiting from emerging markets.

Shopping for clothes or accessories was most common in London, Scotland, Yorkshire and the southwest of England, though, for reasons unknown, Scotland dominates the souvenir market.

Visa delays, along with the fact that international visitors have to do paperwork twice if they are going to countries in the Schengen area also have infuriated retailers.

However, despite Theresa May’s decision this week to bring the UK Border Agency back into the Home Office, the situation is improving, perhaps more than stories about Heathrow delays would suggest.

“They finally understand that they have a role in economic growth: that tourism creates jobs and that people have to be allowed in if they are to spend money,” said one official.

The 31 million who visited the UK last year spent £18.7 billion and tourism authorities hope to boost tourist numbers to 40 million by 2020.

Tourism leaders had feared that the Olympics would drive down numbers – which is what usually happens in host cities in the year the games are held – but London increased its visitor numbers by 4 per cent.

Besides shopping, culture and history play a large part in the UK’s attractiveness, while London’s “feel good” atmosphere during the Olympics has done much to change attitudes.

And then there is football: 900,000 visited the UK to go to matches in 2011, including 174,000 Irish, though they were more likely to head to Manchester, Liverpool or Glasgow.

Didier Drogba, for example, gave up a morning to tape a video when he was at Chelsea. So too did Manchester United’s Shinji Kagawa, who encouraged his country’s tourists to head to the northwest. “He’s huge in Japan, bigger than Alex Ferguson, ” said one tourist official.

Kagawa’s efforts are needed because the 2011 riots are still fresh in the memories of many Japanese.

“They’re incredibly cautious. Every place else remembers the royal wedding, the queen’s jubilee, the Olympics. The Japanese remember the riots,” the official said.

Following a succession of big events, the UK’s challenge now is to maintain its profile in international markets. Tourists, where they have the cash, are eternally fickle.

The pregnancy of the Duchess of Cambridge is set to guarantee acres of newsprint and many hours of television coverage however.

Republicans – of the UK variety, that is – can be expected to rail about the cost of, and the privilege accorded to, the royals, but they do put bums on seats. So we can expect to see large crowds outside Buckingham Palace in July, including Chinese people wearing Burberry.