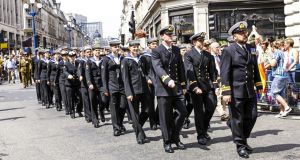 Britain lifted its ban on LGBT+ military service members in 2000 following a victory by campaigners at the European Court of Human Rights. File photograph: Getty

British LGBT+ veterans dismissed from the armed forces because of their sexuality will find out this week how to get back their confiscated medals, but some ex-servicemen said the government had taken too long to make the announcement.

The defence ministry said in November 2019 that all veterans who had lost their jobs due to a now-scrapped ban on LGBT+ people in the military would be able to reclaim the medals that were taken from them upon dismissal.

Soon after that, Joe Ousalice – a bisexual Royal navy veteran who fought a nearly 30-year legal battle following his dismissal in 1993 – was presented with his three good conduct badges and a medal for good conduct and long service.

Mr Ousalice said it should not have taken another year for the defence ministry to announce what would happen to the awards granted to other gay and bisexual veterans.

“Three times I pushed the defence secretary for an answer regarding all the other veterans who lost their medals . . . here we are 12 months later and I still don’t know what they’re doing,” said 70-year-old Mr Ousalice.

“It’s just so frustrating,” he said, adding that he would continue to campaign to get his full pension and for other sacked veterans.

Britain lifted its ban on LGBT+ military service members in 2000 following a victory by campaigners at the European Court of Human Rights (ECHR).

Sacked from navy for being gay

Veterans minister Johnny Mercer said on Saturday about this week’s medals announcement, saying the government “is resetting the UK’s relationship with her veterans, which includes this historic wrong”.

Between 100 and 200 LGBT+ people were discharged each year before the ban on LGBT+ military personnel was lifted, said Ed Hall, who founded the campaign to scrap the ban and was fired from the navy for being gay.

Of them, about 50 veterans including Mr Ousalice have had medals taken away due to being accused or convicted of offences related to their sexuality that are no longer crimes, said Duncan Lustig-Prean, who was one of the ECHR case plaintiffs.

While he said the planned announcement was “late”, he welcomed the fact that the dismissed veterans would get back their honours.

“I’m very pleased to see that finally people, many of whom are now ageing, will receive something which is very important to them, because it reflects their service for this country,” he said. – Reuters