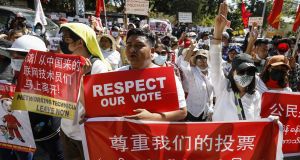 Demonstrators hold up placards during a protest against the military coup in Myanmar, in front of the Chinese embassy in Yangon. Photograph: Nyein Chan Naing/EPA

Myanmar’s military junta has drafted a draconian cyber security Bill that has caused alarm among human rights campaigners and business groups for granting authorities sweeping powers over the internet.

The move to police digital content came as thousands continued to protest in cities across the country against a military coup that toppled the government of Aung San Suu Kyi last week. The military takeover has been condemned worldwide, with US president Joe Biden on Wednesday announcing sanctions on the junta’s leaders and freezing $1 billion of Myanmar government assets held in the US.

The proposed law would require online service providers in Myanmar to store user data at a location identified by the government for three years, according to two English-language translations of the Bill seen by the Financial Times.

The new rules would also require providers to hand over information to authorities “under any existing law” and give the state powers to intervene in cases that threaten Myanmar’s “sovereignty and territorial integrity”.

If convicted of failing to manage data in keeping with the law, individuals could be jailed for up to three years, fined up to Kt10 million (about €5,850), or both.

Business and digital rights groups were still pouring over the Bill on Thursday to try to understand its full implications, including what kinds of companies might be affected. But the initial reaction was negative.

“The ‘Bill’ includes clauses which violate human rights, including the rights to freedom of expression, data protection and privacy, and other democratic principles and human rights in the online space,” a group of Myanmar civil society organisations said in a statement on Wednesday, a day after authorities began circulating a draft of the Bill to telecoms companies.

In an effort to quash dissent, the regime of senior general Min Aung Hlaing ordered telecoms providers to block local access to Facebook, Instagram and Twitter last week and disrupted internet service immediately after the coup and again at the weekend. Facebook has more than 21 million users in Myanmar, or almost 40 per cent of the population, where it is the main portal to the internet for many.

“The military already controls two mobile networks, Mytel and MPT, but now they want to control all online information through an unlawful process and punish those who dare practice their fundamental rights, including freedom of expression,” said Justice for Myanmar, a campaign group.

Facebook and Telenor, the Norwegian company that is one of Myanmar’s four big telecoms providers, said they were aware of the draft law. Both declined to comment.

“The fear of digital surveillance and being persecuted for one’s communications and associations online is having a deep chilling effect on many communities – tech developers, journalists and media sector workers, activists and others,” said Raman Jit Singh Chima, Asia-Pacific policy director for Access Now, a campaign group focused on internet freedom.

Mr Biden urged other countries to follow Washington’s lead and maintain pressure on the junta.

The UN Human Rights Council is due to hold a special session on the crisis in Myanmar on Friday. – Copyright The Financial Times Limited 2021