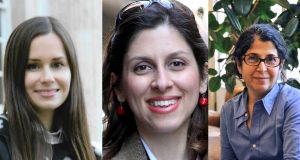 A British-Iranian citizen imprisoned for four years has said she will go on hunger strike in solidarity with another dual national being held in Iran.

Kylie Moore-Gilbert, a British-Australian academic, started an open-ended hunger strike six days ago in protest at being sentenced to 10 years on espionage charges. She wants at minimum to be moved from solitary confinement to a general ward.

She has been held in solitary confinement since October 2018, and just before Christmas she wrote to the Australian prime minister, Scott Morrison, pleading for ministers to do more to secure her release.

A spokesman for Iran’s foreign ministry, Abbas Mousavi, rejected the flurry of publicity over her case and said Iran would not submit to political games or propaganda.

A third dual national, Fariba Adelkhah, a French-Iranian academic, is also on hunger strike. The French government has summoned the Iranian ambassador over her detention.

Ms Zaghari-Ratcliffe’s husband, Richard Ratcliffe, said of Ms Moore-Gilbert’s plight: “Five days on dry hunger strike is becoming critical, and our thoughts go out to Kylie and her family for all this ordeal.

“She was already being taken to the health clinic after 48 hours. By now I would expect Kylie and Fariba to be there almost permanently. If it continues as planned they only have days.

He added: “I hope the Australian and British governments also step up today and shake off the complacency of their holiday heads. It is one thing for the Iranian regime to hold innocent people hostage, it is quite another to let them die.”

In her latest letter to the Australian government, Ms Moore-Gilbert said: “Over the past nine months I have been completely banned from any contact with my family, with the exception of a three-minute phone call [all with my father], which was only granted after I took desperate measures which put my own life at risk.

“I have undertaken five hunger strikes as my only means to raise my voice, but to no avail. As predicted, I have now received a conviction of 10 years in prison, and my appeal court has failed.”

She urged the Australian ministers to review what they had been doing to secure her release.

The Iranian government says both academics were found guilty of espionage and any interference by foreign governments will not help their case.

Mr Mousavi said: “The statement by France’s foreign ministry regarding an Iranian national is an act of interference and we see their request to have no legal basis.

“The individual in question [Adelkhah] is an Iranian national and has been arrested over acts of espionage.”

He said her lawyer had knowledge about the details of the case, which was being investigated.

Iran does not recognise dual nationality and has repeatedly rebuffed calls from foreign governments for consular access to those it has detained. – Guardian