Brexit deal represents all things to all men 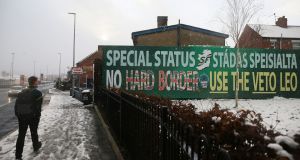 Sinn Féin billboard calls for “No Hard Border”: the European Commission has announced “sufficient progress” has been made in the first phase of Brexit talks. Photograph: Brian Lawless/PA

Launching a history on Friday of the Sunningdale Agreement written by a former top Irish civil servant, the 82-year-old Séamus Mallon joked dryly that he hoped that God would give him time to read it.

Mallon’s rare public outing was appropriate, given that it came just hours after the deal that will allow the United Kingdom to enter the second round of negotiations of its exit from the European Union following Monday’s crisis.

The DUP disagrees with such pithy analysis, but it has merit. Leo Varadkar and Simon Coveney will have the good grace to mask airs of self-satisfaction in order not to spook unionists any further.

However, a little, of course, will be allowed for local and international consumption, though it was probably just as well that the deal was done in the early hours since it reduced the time available for political spinning.

The public declarations by Coveney and Varadkar on Monday played a contributory role in Arlene Foster’s decision to scupper Theresa May and Jean-Claude Juncker’s efforts then to agree.

Friday’s deal passes the dictum of St Paul, who said his mission was to be all things to all men. Perhaps this is its genius: it is all things to almost everyone and most particularly to the DUP and also to Sinn Féin.

Saying that the devil will be in the detail, Sinn Féin president Gerry Adams gave a cautious and qualified welcome, but with a number of caveats to guard against any surprises in the final Brexit agreement

Foster said it copperfastened that NI will leave the EU – including the single market and customs union – with the rest of the UK. Equally, the union is safe, while there will be no border in the middle of the Irish Sea.

Dublin was fine with all that. Instead, it said the deal was essentially the same as Monday’s, Northern Ireland will be fully aligned with the rules of the EU single market and customs union in order to allow a soft North-South border.

Saying that the devil will be in the detail, Sinn Féin president Gerry Adams gave a cautious and qualified welcome, but with a number of caveats to guard against any surprises in the final Brexit agreement.

The big worry for Foster and the DUP was that her unionist opponents would be in a position to characterise the May-Juncker paper as a slippery road to a united Ireland.

Traditional Unionist Voice leader Jim Allister tried to raise such fears but the “creative ambiguity” offered by the wording of the paper has so far dampened any such reaction.

That very ambiguity could even open up possibilities for hard-headed business people to capitalise upon, as one international businessman said to The Irish Times earlier this week.

Then, the businessman said a deal that could leave the North magically inside and outside the single market and customs union offers opportunities for pragmatic business people, whether they be unionist or nationalist.

The agreement has got over a crisis and opened up the possibility of a final Brexit deal that does not threaten North-South trade or movement, or light a fuse under the North’s ever-present constitutional powder keg.

However, there could be trouble still, since paragraph five of the deal states, just as was the case in the run-up to the 1998 Belfast Agreement, “nothing is agreed until everything is agreed”.

But in the meantime, the constructive ambivalence so often beneficial to peace process politics in Northern Ireland has again come to the rescue. Space is created and tensions are eased. The only pity is that the DUP and Sinn Féin seem incapable of being equally productive and imaginative in finding a means to get powersharing politics back working again.