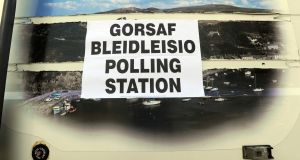 A sign is stuck over a picture on the side of a van used as a mobile polling station in the village of Trecwn, Pembrokeshire in Wales. Photograph: Rebecca Naden/Reuters

Brexiteers claimed victory on the western side of the Severn Bridge after polling 52.5 per cent of the votes compared with Remain’s 47.5 per cent.

And out of Wales’ 22 councils, 17 backed Brexit while only five voted to Remain - despite Wales being heavily funded by the European Union for a number of projects.

The result was in stark contrast to Wales’ celtic cousins in Northern Ireland and Scotland and also saw several local councils ignore the ruling Welsh Labour party’s call to stick with Brussels.

Hours on from the result, Mr Jones brushed off suggestions of stepping down and insisted he would represent the people of Wales no matter how they voted.

Speaking at a press conference in the Welsh Government’s Cathays Park headquarters, he said: “Now is the time for Wales to unite and to think clearly about the future.

“Stability is our number one task.

“The United Kingdom is very disunited now. We have seen the way the referendum campaign was conducted and we see that there is a divide in our society.

“That divide must be repaired if the UK is to prosper.”

The Welsh Labour leader also said he was not surprised at David Cameron’s resignation — and criticised the outgoing PM for the timing of the poll as well as for the final result.

Mr Jones added: “It was his referendum. He chose the timing, he chose the ground on which that battle was going to be fought — there are consequences.

“With campaigns like this there needs to be an effective cross party campaign and that takes months to build up and it was impossible to do that with an election in Wales before the referendum.

“It was impossible to persuade some people that this was not what the referendum was about.”

The father-of-two also said his pre-vote worries that jobs would be lost in Wales remained.

He said: “It is now more difficult to attract investment in Wales and keep jobs in Wales for the simple reason we have uncertainty and we have seen what has happened with the markets this morning.

“My worry is that our competitors elsewhere will be able to say to an investor ‘we can guarantee access to a market of 500 million people’ — we won’t be able to do that.

“That’s going to be a very big hurdle to overcome.”

The former barrister also called on the Leave camp to honour their pledge that “not a single penny” would be taken off Wales post-Brexit.

And he said it was vital for ministers from Scotland, Northern Ireland and Wales to be included in the exit negotiations as he “did not trust” UK ministers.

However, Conservative MP and former Welsh Secretary David Jones, a vocal critic of the EU, said the result had been a long time coming.

He said: “The people of Wales have voted to leave the EU by a compelling margin.

“This is a very important day for Wales.

“I’m also pleased that Wales is the only nation so far to vote to leave the EU.

“I think people in Wales from an early stage have shown their concern about the EU and the way it was encroaching on their everyday lives.”