Brexit talks continue as lorries queue for miles at Eurotunnel

Boris Johnson and Michel Barnier play down prospects of a breakthrough 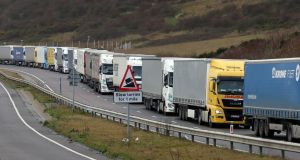 Lorries queue on the A20 to enter the port of Dover in Kent on Saturday. Photograph: Gareth Fuller/PA Wire.

Talks on a post-Brexit trade deal are set to continue into the weekend, with both sides warning that the chances of agreement remain in the balance.

Both Downing Street and the European Commission said the negotiations were still “ongoing”, but that significant differences remained over fisheries and the so-called level playing field rules.

The European Parliament has been pressing for an agreement by Sunday so it can ratify any deal before the current Brexit transition period ends on December 31st.

However, it is thought EU leaders could provisionally sign off on a deal if the talks go on beyond that point, with formal ratification taking place in the new year.

Speaking on Saturday, a fishing industry group in Ireland warned new proposals from the EU to reach agreement in the Brexit trade negotiations would be a “death knell” for the Irish fishing sector.

The latest movement in the talks has seen EU negotiator Michel Barnier propose to hand back 25 per cent of the value of fish caught by EU boats in British waters to the UK, according to reports.

Seán O’Donoghue, chief executive of Killybegs Fishermen’s Organisation, who represent Donegal fishermen, said the concession would be an “unmitigated disaster” for the Irish fishing industry.

Previously the EU position had been an offer to hand back between 15 and 18 per cent of the value of fish caught by EU fleets in British waters to the UK.

Mr O’Donoghue, head of the major industry group, said the fishing sector had been “thrown under the bus” in the talks.

Meanwhile in the UK, Christmas stockpiling and Brexit uncertainty have again caused huge queues of lorries to stack up in Kent.

A long line of HGVs stretched up to five miles on the M20 as freight drivers headed for the Eurotunnel.

Businesses, in a bid to avoid cross-Channel disruption in January, are stockpiling goods before the new year, in addition to the usual Christmas rush.

On Saturday morning the queue along the left-hand lane of the motorway started in the Ashford area and stretched several miles to the Eurotunnel entrance at Folkestone.

There were also long lines of HGVs along the M20 between Capel-le-Ferne — the site of the Battle of Britain memorial on the White Cliffs — to the port of Dover.

The talks mean MPs are on standby to return to Westminster from their Christmas break if an agreement can be struck in the final days of the year.

On Friday, both Boris Johnson and the EU’s chief negotiator Michel Barnier were playing down the prospects of a breakthrough.

The UK prime minister said the negotiations were proving “difficult” and called on the EU to “see sense” and to bring something new to the table.

Earlier Mr Barnier told the European Parliament that the talks were approaching the “moment of truth” and that the path to an agreement was “very narrow”.

If the there is no deal by December 31st, the UK will leave the single market and customs union and begin trading with the EU on World Trade Organisation terms — with the imposition of tariffs potentially leading to higher prices in the shops.

Even with an agreement, there will be major changes at the border from January 1st with new customs checks, with fears of long delays if businesses are not properly prepared for the new rules.

With less than two weeks to the changeover, the Commons Brexit Committee raised a series of concerns about the UK’s “overall state of readiness”.

In a report published Saturday, they said decisions had been made “too late”, while communications with businesses had been “patchy at best”.

Committee chair Hilary Benn said the UK Government still could not provide business, traders and citizens with “certainty” about what would happen.

“With just seven working days until the end of the transition period, significant concerns remain,” he said.

“At this late stage, the Government must be ready to implement contingency plans where necessary to mitigate the effects of any disruption.

“Failure to do so would mean the worst possible start to the new year for many people and businesses who are already experiencing the toughest of times.”