Bono calls on artists to celebrate ‘romance’ of Europe 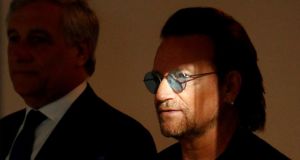 Bono in Brussels: the U2 singer with Antonio Tajani of the European Parliament. Photograph: François Lenoir/Reuters

Bono has called on artists to celebrate the “romance” of Europe at a time when the value of the EU has come under question.

Visiting the European Parliament in Brussels, the U2 singer hailed the European institutions as both a “brain that is strategically working to improve the lives of Europeans, so we do largely live better lives than anyone else in the world”, and a “loudly beating heart”. “I’m not sure it is heard by enough people, and I want to be a part of that romantic idea that is Europe,” he added.

The Irish rock star and anti-poverty campaigner did not mention Brexit in his comments alongside the parliament’s president, Antonio Tajani, but said that pro-European voices were needed at a time when “people are questioning Europe”. “As an artist I think I probably have a role to play in romancing the idea of Europe and seeing it as something warm-blooded,” said Bono. “Europe is a thought that needs to become a feeling, and I am, as an artist, in service of that.”

If you think  about how Hollywood perpetuated the idea of the American dream, when you think about artists involved in the project that is Europe, it’s not that many

Describing himself as “European as well as Irish”, Bono suggested that Europe had lost out from the lack of the kind of positive artistic treatment given to the United States in movies and songs. “If you think about the mythology of America and you think about Hollywood and how Hollywood perpetuated the idea of the American dream... when you think about artists involved in the project that is Europe, it’s not that many,” he said. “I think we need more as people are questioning Europe.”

Tajani thanked the singer for his engagement in the European project, adding: “If we want to protect our citizens we need the European umbrella. It’s impossible to compete during globalisation as Italy, as France, as Ireland, as Germany, with China, Russia, India or the USA. We need to be united all together as friends with a common history, a common identity and common values – first of all, freedom.”

Bono was in Brussels for talks about improving the partnership between Europe and Africa, which he characterised as “an incredible opportunity”. “While America is on its holidays from big ideas, we should sit across the table with our African partners as equals and take over the world,” he said. – PA

Justin Bieber: Seasons – No bum. But he does seem terribly bummed out
8