Chequers sparked resignation of ministers but what exactly is it? 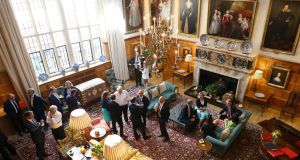 Theresa May and members of her Cabinet in her country retreat Chequers in July 2018. Photograph: Joel Rouse via Getty Images

What is this plan?

The Chequers Plan was tabled by British prime minister Theresa May at Chequers, the prime minister’s country retreat north west of London, and agreed by her cabinet in early July 2018. The plan, officially named “The Future Relationship between the United Kingdom and the European Union, ” details how she sees the UK’s trading relationship with the EU working after Britain formally leaves the economic bloc in March 2019.

What does the plan propose?

May wants to create a “common rule book” for industrial goods and agricultural products that would mean Britain would have to sign up to EU rules for manufactured goods, food and other farm produce without having a say in determining those rules. This would give the UK access to the EU single market and its 500 million consumers for all goods, including food and drink. A “facilitated customs arrangement” between the UK and the EU would remove the need for customs checks and controls between them, operating as a “combined customs territory” or tariff-free area. The UK would charge its own tariffs and trade policies for goods heading to the UK and it would collect EU tariffs on EU-bound goods coming into the UK on behalf of the EU. The plan would allow the UK develop an independent trade policy with the rest of the world, fulfilling the Brexiteer promise to be able to agree trade deals with other countries.

But what happens to services?

Under the proposal, there is no plan for services such as banking and finance, which makes up 80 per cent of the UK’s economy and which the country exports right across the EU. May proposed dealing with services under a separate arrangement that would give the UK much more flexibility to set its own rules, “recognising the UK and the EU will not have current levels of access to each other’s markets.”

Would the Chequers plan avoid a hard border between the EU and UK, including in Ireland?

Under the proposal, goods would travel more or less unhindered across the EU-UK border so Britain sees the Chequers plan as ensuring co-operation on trade which would solve the Irish Border question, one of the most intractable problems that has so far proven impossible to solve by EU and UK negotiators.

How does the plan differ from current EU-UK trading arrangements?

The proposal, creating a free trade area of goods between the EU and UK, would effectively continue existing regulatory and customs arrangements for industrial and food products after Brexit as the UK would agree to accept future regulations agreed in Brussels by making an up-front commitment, by way of a treaty, to “ongoing harmonisation with EU rules.”

This sounds familiar, is it?

Yes. It is similar to the arrangement that Norway, which is outside the EU but inside the European Economic Area, has with the bloc. Norway makes a contribution to the EU budget and abides by EU rules - most often referred to as a “rule-taker” - and the rulings of the European Court of Justice, which enforces them, in exchange for having access to the single market.

But would the European Court of Justice adjudicate disputes under Chequers?

No. The UK proposes establishing a “joint institutional framework” to interpret agreements between the EU and the UK that would be done by each side’s respective courts. UK courts would pay “due regard” to EU case law in areas where the common rulebook continued to apply and cases would still be referred to the European Court of Justice as the interpreter of EU rules, but disputes would be resolved through a “Joint Committee” and neither an EU court or UK court could resolve disputes between the two.

Does the plan contain any other big differences to the Norway model?

Yes. The UK parliament, under the Chequers plan, would be able to block any changes to the EU rules “recognising that this would have consequences.” The plan would also mean the UK would no longer agree to the EU rule covering the free movement of people across borders, a key demand for hardline Brexit supporters and eroding one of the EU’s “four freedoms” - free movement of goods, services and capital are the others - set by Brussels for having access to the single market.

How has the Chequers plan gone with the EU?

Not well. The EU said that while it had some positive elements, it was unworkable, arguing that Britain was essentially cherry-picking EU rules it liked for access to the single market and choosing not to accept others. Brussels fears that the UK businesses would be given an unfair advantage over their EU competitors if the UK only has to apply some EU rules and not others, for example on environmental protections. The EU is also concerned about a third country outside the reach of its supervision and beyond the remit of the European Court of Justice controlling its borders and collecting tariffs on its behalf.

And how has it gone down within May’s own party?

Not universally well. It led to the resignation of two senior cabinet members, Brexit secretary David Davis and foreign secretary Boris Johnson. Davis argued that adhering to EU rules would leave Britain’s “fingers caught in this mangle” and render control of the British parliament over UK law “more illusory that real.” More controversially, Johnson said that the plan “wrapped a suicide vest” around the British constitution and “handed the detonator” to Brussels. He has called on May to “chuck Chequers.”