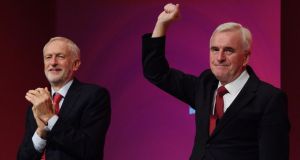 The Labour leadership sought on Monday to play down divisions over a second Brexit referendum after shadow chancellor John McDonnell suggested that the option of remaining in the EU would not be on the ballot.

Delegates at the party’s annual conference in Liverpool will vote on Tuesday on a lengthy, composite motion on Brexit that says that, if parliament rejects Theresa May’s Brexit deal, Labour will seek a general election. But if it cannot force an election, the party “must support all options remaining on the table, including campaigning for a public vote”.

Campaigners for a second referendum on Brexit have argued that voters should have the option of remaining in the EU rather than leaving on bad terms or with no deal. But Mr McDonnell said on Monday that the referendum should be on the Brexit deal the prime minister brings back.

“If we are going to respect the last referendum, it will be about the deal; it will be a negotiation on the deal,” he told the BBC.

“Parliament will determine the nature of the question that will be put, but the first stage of that is to see if we can get a deal that is acceptable and brings the country together again. And I’ve always thought we could.”

But the party’s shadow Brexit secretary Keir Starmer said that at a five-hour meeting on Sunday night to agree the wording of the Brexit motion, it was clear that remaining in the EU had to be an option.

“The meeting last night was very clear that the question of a public vote should be open. We weren’t ruling out options and nobody was ruling out Remain,” he said.

Pro-European MPs complained that the motion had been watered down to allow for a referendum only if Labour was unable to trigger a general election. Under the Fixed-term Parliaments Act, only a specific no-confidence motion or a two-thirds majority in the House of Commons can authorise an election.

Tottenham MP David Lammy, who is campaigning for a referendum on the final Brexit deal, said it would be farcical to have a vote without the option of remaining in the EU.

“A people’s vote is the only realistic option to save this country from the car crash of Brexit. No Tory or DUP MP is likely to vote for a general election. Turkeys do not tend to vote for Christmas,” he said.

“We’ve now got to turn up the noise until we secure a public vote which gives us the option to remain in the UK.”

The motion delegates will debate on Tuesday commits Labour to rejecting any Brexit deal that fails to guarantee that the Border will remain open.

“Conference resolves to reaffirm the Labour Party’s commitment to the Good Friday agreement of 1998 including no hard border in Ireland. Conference believes that there is no satisfactory technological solution that is compliant with the Good Friday agreement and resolves to oppose any Brexit deal that would see the restoration of a border on the island of Ireland in any form for goods, services or people,” the motion says.

Brendan Howlin, who is attending the conference as leader of the Irish Labour Party, said on Monday that there was no good Brexit option for Ireland.

“Obviously, the best outcome for Ireland would be one where there is a second referendum, in which the British people have the opportunity to democratically decide, based on new information, about the different options for the UK’s relationship with the European Union. Ireland would warmly welcome an outcome where the British people decided to remain in the EU,” he said.