Turkish officials say they have audio and video of Khashoggi killing 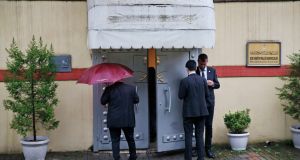 Turkish investigators have claimed video and audio recordings exist that prove Jamal Khashoggi was killed, a sign that Ankara is willing to keep up the pressure on Riyadh to back up its claims it has nothing to do with the dissident journalist’s disappearance.

US government officials told the Washington Post late on Thursday that their Turkish counterparts claimed the recordings from October 2nd prove Mr Khashoggi was murdered and his body dismembered during a visit to the Saudi consulate in Istanbul to pick up marriage paperwork.

The alleged audio evidence is particularly strong, officials said. “You can hear his voice and the voices of men speaking Arabic,” a source told the Washington Post. “You can hear how he was interrogated, tortured and then murdered.”

While US officials said the contents of the supposed tapes had been described to them, it was not clear whether they had seen or listened to the recordings themselves.

Admitting the existence of any planted listening or video devices is a difficult balancing act for the Turks, who are wary of revealing any efforts or methods used to spy on foreign operations inside the country, and are also at pains to maintain a delicate political and trade relationship with Riyadh.

Saudi Arabia has vehemently denied all allegations it was involved in the journalist’s disappearance and says he left the consulate safely shortly after entering it last week. Late on Thursday, however, it was announced that US investigators would assist a joint Turkish-Saudi investigation into how the 59-year-old vanished.

Riyadh previously said Turkish investigators could search the consulate, which as a diplomatic building is considered sovereign Saudi territory. However, permission was withdrawn after Turkish media published the names and pictures of an alleged 15-man assassination team captured on CCTV at Istanbul’s Ataturk airport, which included a forensics expert and several Saudi intelligence and military officers.

As well as the six-storey consulate, the investigation is focused on the consul general’s home 200 metres away, where it is believed Mr Khashoggi’s body was disposed of.

Mr Khashoggi, a well-known and respected member of elite Saudi and Washington DC circles, left Saudi Arabia last year after growing fearful for his safety and has since served as a columnist for the Washington Post. He has criticised Mohammed bin Salman since his appointment as crown prince and de facto ruler of the kingdom in 2017.

It was reported by the Washington Post on Wednesday that US intelligence officials were aware of a plan to lure Mr Khashoggi back to Saudi Arabia and detain him. – Guardian