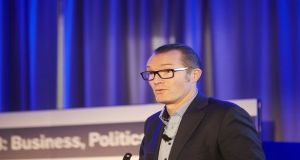 Greencore chief executive Patrick Coveney: “This idea that no deal is better than a bad deal - well, no deal is a truly bad deal.”

British consumers will have “a huge problem” buying fruit and vegetables all year round without “very pragmatic” arrangements after Brexit, Patrick Coveney, chief executive of Greencore, has said.

The businessman, who runs the third-largest food company in the UK and one of the largest suppliers of sandwiches and convenience food to supermarkets in Britain, warned of widespread food shortages in the UK without an agreement around Brexit after the UK quits the EU in March 2019.

Speaking at a conference on Brexit’s impact on the agri-food sector, the businessman – a brother of the Government’s lead negotiator, Tánaiste and Minister for Foreign Affairs Simon Coveney – warned that Brexit would be “catastrophic” for many Irish businesses if it were “to unfold as badly as it could”.

“This idea that no deal is better than a bad deal – well, no deal is a truly bad deal,” he said.

He expressed grave concerns about the impact of a “plethora” of potential supply chain, logistical and customs checking processes post-Brexit for food importers and exporters based in the UK in the transitional period after the UK’s departure next year.

“It would take decades to put all that in place in an efficient way so we are more concerned about the near-term impact of that,” Mr Coveney told a British Irish Chamber of Commerce conference in Dublin.

“The UK retailers are very concerned about that. British consumers are used to being able to buy fruit and vegetables, in particular, all year round. Frankly, absent some very pragmatic interpretations on a transition agreement, that is going to be a huge problem from next March.”

The Greencore chief said that the Irish-based international food company was not really concerned about potential tariffs after Brexit but about “getting fresh food in and out of the UK”.

“If you end up with 50-mile tailbacks in Calais and corresponding tailbacks in Dover, it won’t really matter whether there is a 15 or 20 per cent surcharge on lettuce and fruit and vegetables coming from southern Europe. It will all rot in containers and there is no good answer to that at the moment,” he said.

In his address to the conference, Minister for Agriculture Michael Creed said that he was “concerned” about talk of “a no-deal Brexit” re-emerging in the media.

“A no deal is the worst possible deal for the agri-food sector in the UK and in Ireland, ” he said. “It would almost certainly result in the imposition of significant tariffs on food exports in both directions.”

In a panel discussion Mr Coveney predicted that even post-Brexit Britain, with its 60 million consumers, will have a “significant deficit” in producing food as there are “no meaningful moves to increase domestic production” despite the potential risk of food shortages with leaving the EU.

He said maintaining the employment of the 12,000 people who work for Greencore in the UK was “the single biggest Brexit risk” to the company.

Greencore makes two-thirds of all the pre-prepared sandwiches made in the UK.

Mr Coveney painted a very bleak outlook about what might happen after Brexit in light of the political deadlock between the EU and the UK around solutions after the UK’s departure.

Britain was at “a pretty fragile place” on Brexit now as negotiations between London and Brussels to agree a final withdrawal treaty and a post-Brexit trading relationship have stalled, he said.

He sees the Chequers plan proposed by British prime minister Theresa May, which keeps the UK closely tied to EU rules on goods and food, as the “best working compromise”.

The plan was a “pretty satisfactory way through this in some form or other if it can be delivered”, he said, but it was “under siege” from hardcore Brexiteers and hardcore Remainers.

If there was “a material row-back” from the Chequers plan, it would be “very hard” to see how Mrs May could survive politically, said Mr Coveney. If she did resign, the UK would be “staring into a virtual abyss as to what political leadership would look like”, he added.

“It is very hard to see how there is any prospectively stable alternative to the current government,” he said.

Mr Coveney expects some “11th-hour” solution would be found that would “definitely be a fudge”, and describes the political situation in the UK as “very fluid now.”

“I find it very, very difficult to see how a scenario where Britain doesn’t leave the EU but I also think the likelihood of some kind of catastrophic hard Brexit is pretty low too,” he said.

Speaking to The Irish Times afterwards, Mr Creed said that he believed the Chequers proposal and working with Mrs May’s plan were “our best chance of getting an agreement if you look at the alternatives”, despite the EU’s chief Brexit negotiator pointing out its flaws.

“It certainly has its flaws and they will be unpicked in the negotiations, but I think both the Chequers document and Theresa May and her cabinet are the best prospect of getting a deal,” he said. “The alternative is unthinkable.”

1 Irish company paid €1.2m a year by collapsed Blumenthal-linked Australian restaurant
2 Hugo MacNeill steps back from Goldman Sachs role
3 Should AIB compensate me for upsetting letter on arrears?
4 Legal eagles yet to land; economy to grow 3.4% this year; and CEOs on social media
5 ‘I wouldn’t be a big saver. I tend to buy now and repent at leisure!’
6 How to turn racists’ genetic arguments against them
7 Irish economy to grow by 3.4% this year, predicts EY
8 Why bosses should not be afraid of speaking out on Instagram
9 Poll on second election, concerns over Irish pension gap, and Ireland’s rich list
10 Cross border trade reached all time high of €7.4bn in 2018
Real news has value SUBSCRIBE