China vows to retaliate if US imposes sanctions over Xinjiang 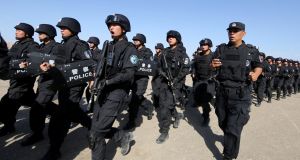 China has promised to retaliate if the US imposes sanctions on a provincial leader in the troubled Xinjiang region, and the country’s ambassador to Washington reiterated Beijing’s line that the mass detention of Muslims there was to steer them away from terrorism.

Cui Tiankai, speaking in an interview with Reuters in Washington DC, likened China’s actions in Xinjiang to the US efforts to combat Islamist extremists in the Middle East.

“Can you imagine [if] some American officials in charge of the fight against Isis [Islamic State] would be sanctioned?” Mr Cui said. “If such actions are taken, we have to retaliate.”

There has been an international outcry from governments, human rights organisations and a United Nations panel after reports that a million or more mostly Muslim Uighurs and other Muslim groups were being held in secret detention facilities in Xinjiang.

After initially denying the camps existed, China said it was operating facilities in the region which were voluntary “vocational educational centres” to improve employment opportunities for minor offenders. Foreign minister Wang Yi has described reports of abuses as “gossip” and said the world should trust the Chinese government’s version of events.

While the United States was using missiles and drones to kill terrorists, “we are trying to re-educate most of them, trying to turn them into normal persons [who] can go back to normal life,” Mr Cui said.

Officials in the US have said they were considering sanctions on individuals such as the Xinjiang Communist Party secretary Chen Quanguo, as well as targeted measures aimed at security companies linked to the abuses. Mr Cui said China’s response to sanctions would be “in proportion”.

China and the US are currently at odds over trade issues and a number of other areas, such as China’s ambitions in the South China Sea. President Xi Jinping is expected to meet his US counterpart Donald Trump at the G20 meeting in Argentina on Friday.

Beijing says a strong crackdown in Xinjiang, where a vast surveillance network has been installed, with police checkpoints, DNA collection and restrictions on some aspects of Islam, was needed to combat separatist groups and terrorists.

On Monday, a group of 278 scholars urged China to close the detention centres and called for sanctions on Chinese leaders. “This situation must be addressed to prevent setting negative future precedents regarding the acceptability of any state’s complete repression of a segment of its population, especially on the basis of ethnicity or religion,” the group said in a statement.

Xinjiang is a key element in Mr Xi’s Belt and Road Initiative, a vast infrastructure project aimed a boosting China’s trade links, and the scholars called on countries taking part in the initiative to make their involvement contingent on the closing of the camps.

In her maiden speech as UN human rights chief, Michelle Bachelet on Monday called on China to allow in monitors to inspect the camps. China said Ms Bachelet should respect China’s sovereignty.