Puerto Ricans dance in the streets after governor quits 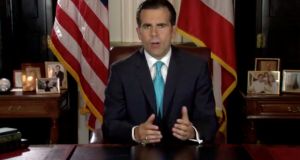 Puerto Ricans danced among the brightly coloured houses of San Juan on Thursday after governor Ricardo Rosselló capitulated to 12 days of protests and resigned, but many in the crowd warned they would reject the person in line to succeed him.

The first-term governor told the island just before midnight that he would step down on August 2nd in the face of public anger over profane chat messages and a corruption scandal that drew as many as 500,000 protesters on to the island capital’s streets.

Protesters were not enthused over secretary of justice Wanda Vázquez being next in line to succeed Mr Rosselló, based on current cabinet vacancies: One waved a sign reading “Wanda, we don’t want you either” and another shouted, “Wanda, you’re next!”

Leaders of Mr Rosselló’s pro-statehood party were scrambling on Thursday to negotiate another successor, according to three sources familiar with the talks who requested anonymity to discuss them.

During Mr Rosselló’s term as governor, Puerto Rico endured back-to-back 2017 hurricanes that killed some 3,000 people and wreaked widespread destruction months after the US territory filed for bankruptcy to restructure $120 billion of debt and pension obligations.

“I’m really, really, really, really happy, but I know we need to stay right here, screaming,” Julie Rivera (21) said after Mr Rosselló said he would step down. She added that she believed his designated successor, 59-year-old former district attorney Vázquez, was too close to the disgraced governor.

“During our career in public service, we’ve showed that we’ve worked in a righteous and honest manner to benefit the public,” Ms Vázquez told Puerto Rican media.

Ms Vázquez was unlikely to actually become governor, said one of the three sources, a person familiar with Mr Rosselló’s administration.

“Whoever it is, it can’t be someone in Ricky’s inner circle or close to his government,” that person said. “It has to be someone from the outside.”

That source and others said a top candidate for the job is Pedro Pierluisi, the island’s former representative in the US Congress.

Mr Pierluisi, a member of Mr Rosselló’s party, ran against him in the gubernatorial election in 2016, losing in a primary. He could be positioned to become the next governor if he is nominated and confirmed as secretary of state before Mr Rosselló resigns. That post, currently vacant, is first in line to succeed the governor.

Multiple Democratic members of the US Congress urged their colleagues not to allow the political turmoil to limit federal funding for the disaster-rocked island or to block a plan to increase federal Medicare funding for the island by $12 billion over four years.

Weary of crisis and a decade-long recession, Puerto Ricans were angered when US authorities on July 10th accused two former Rosselló administration officials of pocketing federal money through government contracts.

The final straw for many came on July 13th when Puerto Rico’s Center for Investigative Journalism published 889 pages of chat messages between Mr Rosselló and 11 close allies.

The group made profane and sometimes violent statements about female political opponents, gay singer Ricky Martin and ordinary Puerto Ricans in messages between November 2018 and January 2019.

Mr Rosselló also faced the threats of an investigation by the island’s Department of Justice and impeachment by its legislature.

“To continue in this position would make it difficult for the success that I have achieved to endure,” Mr Rosselló said in an overnight address, listing accomplishments in office that ranged from creating new industries to promoting equal pay for women.

In a sign that investors saw Mr Rosselló’s departure as a positive, some of Puerto Rico’s defaulted general obligation bonds traded at their highest prices in three months in the US Municipal Market.

“This kind of helps to eliminate some of the rampant corruption that plagued the commonwealth for decades,” said Shaun Burgess, a portfolio manager at Cumberland Advisors, which holds about $145 million of insured Puerto Rico bonds.

Not all Puerto Ricans were delighted at Mr Rosselló’s fall.

“He’s taking the fall for a bunch of past governors that put us in this position,” said Ricky Shub (33). While Mr Shub agreed that it was time for Mr Rosselló to go, he added, “everyone here is right to do what they’re doing, but they should have done it 20 years ago”. – Reuters