Call to protect ICC legal personnel against possible US sanctions 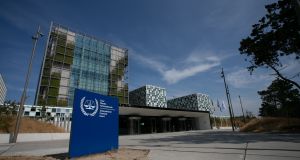 International Criminal Court in The Hague: appeal is latest skirmish since the White House revoked the US travel visa for the court’s prosecutor, Fatou Bensouda. Photograph: Ant Palmer/Getty

In an unprecedented appeal, the global network which supports the International Criminal Court (ICC) has described the Trump administration as “exceptionally hostile” – and asked countries that back the court to “protect” its judges, prosecutors and senior staff against potential US sanctions.

The appeal is the latest in a series of bad-tempered skirmishes since March, when the White House revoked the US travel visa for the court’s prosecutor, Fatou Bensouda, in response to her application to investigate possible war crimes by US soldiers and the CIA in Afghanistan after May 1st, 2003.

Ms Bensouda makes regular trips to New York to brief the UN Security Council, and those visits – which she pledged to continue irrespective of the visa – are regarded as covered by diplomatic immunity.

US secretary of state Mike Pompeo then went further and announced a policy of imposing visa restrictions on “individuals directly responsible for any ICC investigation of US personal” on the basis that the court was “attacking America’s rule of law”.

Washington appeared to have won the day when Ms Bensouda’s application was turned down by ICC judges as “not in the interests of justice”. However, last week she was granted leave to appeal that decision and transatlantic relations have again soured.

The Coalition for the International Criminal Court (CICC), representing 2,500 civil society organisations in 250 countries, welcomed the possibility that the investigation may now go ahead and examine the actions of all sides, Afghan government soldiers and the Taliban as well as the US.

It said the previous decision not to go ahead had been seen by critics as “a shocking abandonment” of the hundreds of thousands of victims who had been killed, maimed or tortured in the conflict.

“Is it ever in the interests of justice for the ICC to refuse permission to open investigations into grave crimes because the prosecutor’s office has a limited budget, or member states may not co-operate, or other such political considerations?” asked CICC legal officer Ricardo Izquierdo, revealing tensions inside the court.

He said the prosecutor’s appeal would serve the worthwhile purpose of establishing the factors that judges are permitted to consider in future when determining whether to grant an application to open an investigation.

However, he added: “It is shocking that impunity still reigns for those implicated in the commission of war crimes and crimes against humanity allegedly committed in the Afghanistan conflict.”