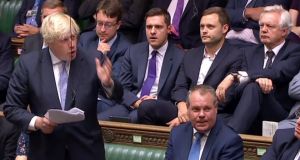 Boris Johnson has used a stinging resignation speech in the House of Commons to urge the British prime minister to change tack on Brexit, branding the future sketched out at Chequers a “miserable, permanent limbo”.

Mr Johnson resigned as foreign secretary last week in protest at the Chequers agreement, which he had initially signed up to.

Giving a personal statement to MPs on Wednesday, Mr Johnson praised Theresa May, saying: “Everyone will recognise her courage and resilience.”

But he repeatedly criticised the compromises he claimed had been made between what he called the “bright certainties” of Ms May’s Lancaster House speech in January 2017, and the Chequers agreement, saying a “fog of uncertainty” had descended.

Mr Johnson said the Lancaster House approach had been welcomed by commentators and the financial markets, but that “we never actually turned that position into a negotiation . . . instead we dithered, and we burned through our negotiating capital”.

With the Conservative party deeply divided over Brexit, some at Westminster had expected Mr Johnson to urge his colleagues to dislodge the prime minister. But he insisted there was still time for Ms May to change course.

He stopped short of urging colleagues to replace Ms May as the Conservative party leader, but there is little chance of Ms May ditching a policy with which she is so closely associated.

Mr Johnson, who was the figurehead of the Vote Leave campaign, warned the government not to “make the fatal mistake of underestimating the intelligence of the public”, who he claimed would understand that the deal the prime minister is proposing is “Brexit in name only”.

His view reflects that of the European Research Group (ERG) of Tory backbench rebels, who forced Ms May into a series of concessions on her customs Bill earlier this week.

Few senior Tory figures turned out to watch Mr Johnson deliver his speech. He was flanked by the hardline Eurosceptic Nadine Dorries, and accompanied by the former Brexit secretary David Davis, whose own resignation over the Chequers deal pre-empted Mr Johnson’s.

Mr Johnson’s brother Jo Johnson, the minister of state for transport, was on the frontbench.

The former mayor of London listed a series of compromises he said had been made since Lancaster House, including the €40 billion payment agreed as part of the withdrawal agreement, the continued oversight of the European Court of Justice over some issues, and the “common rule book” for key industries.

“Far from making laws in Westminster, there are large sectors in which ministers will have no power to initiate, innovate, or even deviate,” he said, describing the Chequers approach as “volunteering for economic vassalage”.

He also suggested the issue of the Border in Northern Ireland had been allowed “to become so politically charged as to dominate the debate”.

No one wants a hard border, he said, “but there certainly can be different rules north and south of the border, to reflect the fact that there are different jurisdictions – there already are”. – Guardian