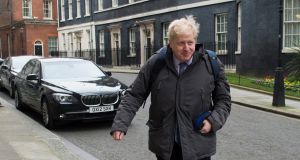 Mayor of London Boris Johnson leaves a cabinet meeting at 10 Downing Street on Tuesday. He had earlier rescinded a call for senior staff in his office to back the his call for Britain to leave the EU or remain silent. Photograph: Will Oliver/EPA

London mayor Boris Johnson has been accused of “rank hypocrisy” after his chief of staff told senior colleagues to back the mayor’s call for Britain to leave the EU or remain silent. Mr Johnson on Tuesday rescinded the instruction, which he described as “a cock-up”, insisting he wanted to “let a hundred flowers bloom” by allowing his senior staff to speak out as they choose on the referendum.

“Nobody has been gagged, I was only made aware of this edict very late last night and it ceased to be operative as soon as I was. It obviously hasn’t been operative because my advisory team take a very different view from me,” he said.

The email from Mr Johnson’s chief of staff telling colleagues to avoid dissent on the referendum emerged a day after the mayor claimed that the director-general of the British Chambers of Commerce John Longworth, who was suspended for speaking in favour of leaving the EU had been “crushed by the agents of Project Fear”.

Former shadow business secretary Chuka Umunna, who is campaigning for Britain to stay in the EU, said the row exposed the rank hypocrisy of Mr Johnson and other Leave campaigners who were “trying to have their cake and eat it”.

Bank of England governor Mark Carney on Tuesday denied that the bank was taking sides in the referendum after Conservative MP Jacob Rees-Mogg accused him of making speculative pro-EU comments. Mr Carney was appearing before the House of Commons Treasury Committee, warning that some financial institutions could move from the City of London to Ireland or other European countries if Britain left the EU.

“What concerns me is that the influence and the strength of the Bank of England is in its Olympian detachment from day to day political partisanship. And in your evidence, in your letter and in your speech you are getting into political partisanship, removing yourself from your Olympian detachment, damaging the Bank’s ability to regulate through influence, which has historically been just as important as the letter of the law,” Mr Rees-Mogg said.

Mr Carney said the bank had not shown any bias in its comments on the referendum and denied that he had been leant on by Downing Street to take a pro-EU line.

“I have not had conversations with the prime minister about what I might say about the European Union, ” he said.

Mr Carney said the bank would not be providing a full assessment of the economic advantages and disadvantages of EU membership but he said the short-term effects of leaving the EU could include a sharp fall in the value of sterling, and some job losses if financial services companies left the City of London.