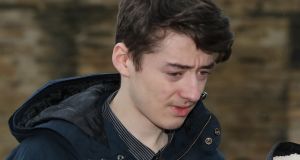 Michael March arrives at Newcastle Crown Court, sitting at Moot Hall, where he was jailed for six months after admitting possession of a bladed article. Photograph: Owen Humphreys/PA Wire

An axe-wielding teenager who dressed up as a clown and terrified a pregnant woman has been jailed for six months in the UK.

Michael March (18) is thought to be the first person imprisoned in Britain after the pranking craze in which people dressed up as clowns to scare others swept the country.

March dressed as “killer clown” and banged an axe on the floor to scare a couple walking past him on the night before Halloween last year.

Newcastle crown court heard he terrified the couple by hitting the foot long axe on the floor in South Shields just after 9pm.

The woman, who was 22 weeks pregnant, threw a brick at him in an attempt to defend herself before he ran off.

Jailing him for six months, Judge Jamie Hill said: “Brandishing an axe and threatening people in the street is serious whatever the context.”

At the previous hearing, Paul Anderson, prosecuting, said March waited for the couple in the car park of the Sand Dancer pub in Sea Road.

He said the offence was carried out at a time when the clown craze was sweeping the nation.

Mr Anderson said the pregnant woman called police and told them “she had been chased by a male wearing a clown mask, brandishing an axe”.

Two youths ran off and were traced on CCTV before March, then aged 17, was arrested. The axe and a clown mask were found in his backpack.

When he was arrested March told police: “I’m sorry, I was not going to hurt her.”

Mr Anderson said March, from Gateshead, told police he had an axe and he was banging it on the floor to scare people.

Mr Anderson said: “It had the desired effect because she picked up a brick and threw it at him. He tried to explain it was a prank and ran off in something of a panic. He said it was all meant to be a joke that went badly wrong.”