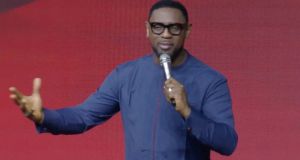 Nigerian activists are calling for women to speak out about sexual harassment and abuse by religious figures, after a famous evangelical Nigerian pastor was accused of rape.

Biodun Fatoyinbo has stepped down from his position running one of Nigeria’s fastest-growing pentecostal churches, the Commonwealth of Zion Assembly, since the allegations against him emerged last week. The pastor, who is based in Abuja, had previously been nicknamed “Gucci pastor” because of his penchant for expensive clothes, according to local media.

The allegations were made by Busola Dakolo, who says he raped her when she was aged just 16. Dakolo’s husband is well-known singer Timi Dakolo.

In a lengthy interview, Dakolo said she came from a troubled home and sought solace in a Saturday fellowship group Fatoyinbo’s church ran, before he began to visit her at home.

She says the pastor encouraged her to sing at the meetings and to join him alone for rehearsals.

Finally, she says, he raped her at home, saying afterwards: “You should be happy that a man of God did this to you.”

She alleges he did it again a week later and told her: “You’ll be fine. This thing is not a new thing. Men of God do this.”

Fatoyinbo denies the charges. In an Instagram post, he said the past few days had been “sobering” and he would take a leave of absence from his position. “It is in the interest of the flock of Christ that issues concerning me do not become a distraction to their worship of the Lord.”

The pastor said he was seeking guidance and spiritual counsel from Christian leaders around the world.

On Sunday, protesters stood outside different branches of the Commonwealth of Zion Assembly, holding placards which read: “Thou shall not rape.”

Nigeria is not the only African country activists say is undergoing a #MeToo moment. The Gambia, a small coastal country west of Nigeria, is also in the middle of a public debate about sexual assault and abuse of power, after former dictator Yahya Jammeh was accused of raping a former beauty queen.

The allegation, by 23-year-old Fatou “Toufah” Jallow, emerged a week ago. Jallow says she was 18 when the alleged rape happened.

Jammeh has been in exile in Equatorial Guinea since 2017, though his political party denied the allegations against him.

Jallow has called for other rape victims to come forward, particularly those she says may have been victims of the former Gambian president.

“I come from a culture where rape is not named,” Jallow wrote in the Canadian Globe and Mail newspaper. “Mr Jammeh behaved as if the women of Gambia were his property. Well, we are not, and we never were.”