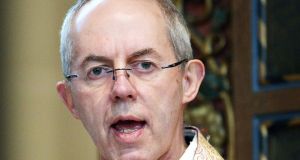 A schism in the worldwide Anglican Communion over homosexual rights and women clerics would be a failure but not a disaster, the spiritual head of Anglicans said today at the start of a high-stakes meeting between conservative and liberal primates.

Archbishop of Canterbury Justin Welby is hosting the heads of the communion’s 37 other provinces around the world for a week of talks to try and work out if and how they can stick together after more than a decade of bitter disagreements.

“Certainly I want reconciliation, but reconciliation doesn’t always mean agreement. In fact, it very seldom does. It means finding ways to disagree well and that’s what we’ve got to do this week,” Archbishop Welby told BBC Radio 4.

The communion, which has about 85 million members in 165 countries, has been deeply divided over issues of gender and sexuality between liberal churches in North America and Britain and their conservative counterparts, especially in Africa.

Such is the strength of feeling that before the Canterbury talks had started some conservative primates were already dangling the threat of a walk-out. Archbishop Stanley Ntagali, head of the Anglican province of Uganda, said last week that unless “discipline is implemented and godly order restored”, he would withdraw from the meeting. – (Reuters)