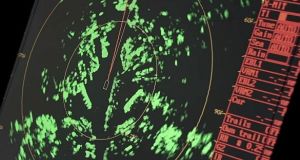 Helicopter and three vessels were involved in the search-and-rescue operation off the Kent coast.

British border and coastguards picked up 49 suspected migrants on Thursday as they were trying to cross the English Channel from France in small boats, according to media reports.

The group of men, women and one child said they were from Afghanistan, Iran and Iraq, the BBC reported.

A further two boats carrying 14 migrants were dealt with by French authorities, the broadcaster said.

Sky News showed people, some wearing life jackets and others wrapped in blankets, being escorted by border force officials to the shore in the port of Dover in southeastern England.

“HM Coastguard has been co-ordinating a search and rescue response to a number of incidents off Kent working with the Border Force,” Sky cited the emergency service as saying.

A helicopter and three boats were involved in the search-and-rescue operation off the Kent coast.

British border patrols regularly intercept migrants attempting to cross the channel from France. They picked up more than 148 suspected migrants, including women and children, from boats in the area earlier this month. – Reuters