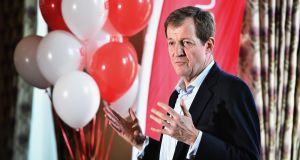 Alastair Campbell: “hard not to point out difference in the way anti-Semitism cases have been handled,” he said on YouTube. Photograph: Jeff J Mitchell/Getty Images

Tony Blair’s former spin doctor Alastair Campbell has been expelled from the Labour Party after voting for the Liberal Democrats at the European elections.

Mr Campbell said on Twitter: “Sad and disappointed to receive email expelling me from uklabour – particularly on a day leadership finally seems to be moving to the right place on Brexit, not least thanks to tactical voting by party members, including MPs, councillors and peers who back peoplesvote_uk.”

Mr Campbell added: “I am and always will be Labour. I voted Lib Dem, without advance publicity, to try to persuade Labour to do right thing for country/party. In light of appeal, I won’t be doing media on this. But hard not to point out difference in the way anti-Semitism cases have been handled.” – PA