Here’s some of the writer’s more memorable quotes on pasta lovers, Prince Charles and Celine Dion 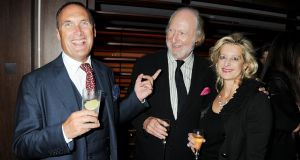 Journalist and critic AA Gill, who has died aged 62 will be remembered for his writing style and his use of language.

Here are eight quotes from the restaurant critic:

Gill on his life in November 2016
“I realise I don’t have a bucket list; I don’t feel I’ve been cheated of anything. I’d like to have gone to Timbuktu, and there are places I will be sorry not to see again. But actually, because of the nature of my life and the nature of what happened to me in my early life — my addiction, I know I have been very lucky. I gave up (alcohol) when I was still quite young, so it was like being offered the next life. It was the real Willy Wonka golden ticket, I got a really good deal. And at the last minute I found something I could do. Somebody said: why don’t you watch television, eat good food and travel and then write about it? And, as lives go, that’s pretty good.”

Gill on his illness in November 2016
“I’ve got an embarrassment of cancer, the full English. There is barely a morsel of offal that is not included. I have a trucker’s gut-buster, gimpy, malevolent, meaty malignancy.”

Gill on the types of people who eat pasta and noodles in September 2016
“Pasta is eaten by happy smiley people having fun with people they love or fancy and are about to shag. Noodles are eaten by people who have no friends.”

Gill on historian Mary Beard who was presenting a TV series on the Romans in April 2012
“She looks like an aborted egg” — “The hair is a disaster, the outfit an embarrassment. If you are going to invite yourself into the front rooms of the living, then you need to make an effort.”

Gill’s assessment of Prince Charles in August 2007
“Prince Charles’s vocal chords are plainly trying to strangle him. He may well become the first monarch to lose his head from the inside out.”

Gill on Canadian pop star Celine Dion in September 2003
“She is a symbol of cultural rot, a corny, calculated act for clueless, obese fans”