Profile of Xi Jinping: He has completed accession to helm of the world’s second largest economy 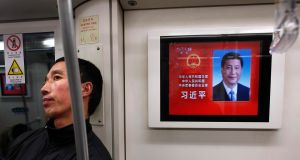 
In the months leading up to the National People’s Congress, which yesterday appointed Xi Jinping as president, the Xinhua news agency ran a series of photographs called “Xi Jinping: man of the people, statesman of vision”.

Croke Park
We see an older man, pushing his father, the late revolutionary hero Xi Zhongxun, in his wheelchair, or kicking a football at Croke Park during his landmark visit last year. By adding the role of president to the more significant positions of General Secretary of the Communist Party and head of the Central Military Commission, which controls the army, Xi has completed his accession to the helm of the world’s second largest economy and its most populous nation.

The son of veteran revolutionary and guerrilla leader Xi, he is one of the “princelings” of the Communist Party’s political dynasties.

When Xi was nine, Mao Zedong sent his father and the family into political exile in the dustbowl of Shaanxi.

The experience helped shape his political career. He is seen as a tough political operator, with a sharp mind, who earned his stripes dealing with a smuggling scandal in the southern Fujian province, and shepherding healthy economic expansion in the eastern province of Zhejiang.

Troubleshooter
He has a reputation as a troubleshooter, having taken over as party boss in Shanghai in 2007 after his predecessor was felled in a corruption scandal. Now 59 years old, he is married for the second time to a flamboyant folk singer, Peng Liyuan, and he has a daughter at Harvard. He has degrees in engineering and law from the prestigious Tsinghua University.

Mr Xi was put in charge of ensuring the success of the Olympic Games in 2008 and the general view is that he succeeded with flying colours.