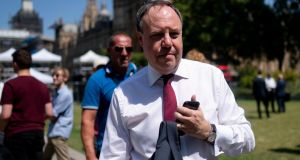 Deputy leader of the DUP Nigel Dodds has said that winning the Conservative party leadership contest is a ‘totally emphatic victory’ for Boris Johnson. Photograph: Will Oliver/EPA

The DUP has welcomed the victory of “committed Unionist” Boris Johnson in the race to become the next prime minister.

However, other political parties in Northern Ireland expressed concern at Mr Johnson’s election as Conservative party leader, particularly in terms of the potential implications for Brexit.

DUP deputy leader Nigel Dodds welcomed the scale of Mr Johnson’s win over Jeremy Hunt, saying it will give him a “strong hand” within the party.

Arlene Foster’s party has been involved in a supply and confidence deal with the Conservative party since the 2017 general election.

Mr Dodds told PA it was a “totally emphatic victory” for Mr Johnson.

“I think it gives Boris a very, very strong hand within his own party to say to those naysayers and people who may be out to thwart the referendum result that really they’ve got to get this done now and move on and govern in the interest of all of the people of the country,” he said.

Asked what he thinks the people of Northern Ireland will make of Mr Johnson becoming Tory leader, Mr Dodds said: “I think that what we want to achieve with Boris is a three-fold set of aims, which is first of all to secure and advance the union of Great Britain and Northern Ireland.

“Boris is a committed Unionist and we will work with him to achieve that objective.

“They also I think want to get Brexit done and dusted. People are fed up with this continued limbo. It needs to be delivered. Whatever people voted in the referendum, the referendum result was a UK-wide one and it needs to be respected.

“And the third priority for us is to get devolved government back up and running in Stormont and we will be talking to Boris and whoever is the Secretary of State after tomorrow about that as an urgent priority.”

DUP leader Arlene Foster has confirmed her party’s confidence and supply deal with the Conservative Party will undergo a scheduled review under new leader Boris Johnson.

“I have spoken with Boris Johnson and congratulated him on becoming leader of the Conservative Party,” she said.

Congratulations @BorisJohnson. Looking forward to continuing our discussions on achieving our shared objectives to advance the Union, deliver Brexit and restore devolved government in NI.

“We discussed our shared objectives of strengthening every part of the Union, ensuring the 2016 referendum result is implemented and seeing devolution restored in Northern Ireland.

“I also look forward to welcoming Mr Johnson back to Northern Ireland shortly after he becomes Prime Minister.”

Northern Ireland is likely to be high on Mr Johnson’s agenda when he becomes prime minister, with his government’s reliance on the DUP’s 10 MPs to give it a working majority in the House of Commons.

The ongoing impasse over Brexit and the implications for the Irish Border, as well as the two-and-a-half-year-old collapse of powersharing government at Stormont, will also ensure the region features prominently in his Downing Street in tray.

Mrs Foster tweeted a photograph of her watching the announcement live at her constituency office in Enniskillen, Co Fermanagh, describing it as a “historic day”.

Ulster Unionist Party leader Robin Swann also congratulated Mr Johnson, but warned the job of prime minister comes with “enormous responsibilities”, at what he described as “such a critical time in the history of the United Kingdom”.

“The bottom line for the prime minister is that any decisions he takes must be in the best interests of all of the United Kingdom and that includes doing everything possible to avoid a no-deal Brexit,” he said.

SDLP leader Colum Eastwood described it as a “worrying step toward a hard no-deal Brexit and a hard border in Ireland”.

“Johnson has coasted into Downing Street on a wave of Brexit bluff and bluster,” Mr Eastwood said.

“It won’t be long until he crashes into the rocky reality that the European Union will not sacrifice the interests of Ireland to appease a man who has lied and slandered its institutions in an effort to secure power.

“All parties in the North must now set our combined efforts to resisting the impulse of this administration to drive off the Brexit cliff edge.”

Alliance leader Naomi Long said the UK needs a “statesman, not a showman”.

“Everyone will have their own opinion on Boris Johnson and his career to date,” she said.

“However, it is now vital as he takes up the reins as prime minister, he demonstrates a level of leadership and seriousness which has been lacking to date.

“At such a critical juncture, we need someone who is detail focused and sensitive to the complexity of the challenges ahead.

“In short, we need a statesman, not a showman.”

Green Party NI leader Clare Bailey said: “Boris Johnson may have been selected as the next prime minister by the Tory Party but has no mandate from the people.

“This new prime minister is intent on a hard Brexit. The man who compared a border on the island of Ireland to the boundary between Islington and Camden cares little about our economic, social and political future.”

The head of the Presbyterian Church in Ireland urged Mr Johnson to take a “keen and personal interest” in the ongoing political talks to restore devolved government at Stormont.

Numerous rounds of talks since the collapse of the Assembly in January 2017 have failed to reach agreement.

Dr William Henry has written to Mr Johnson asking him to “actively encourage those involved to go the extra mile”.

“The absence of devolved government continues to affect the lives of many of the most vulnerable and marginalised people in our society,” Dr Henry said.

“Courageous and compassionate leadership is required to both consolidate, and build upon, the progress already made during the inter-party talks.” – PA