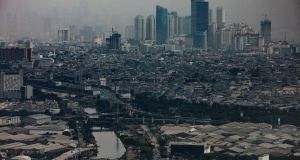 Indonesia has named the site in East Kalimantan on the island of Borneo where it plans to build a new capital to replace Jakarta, president Joko Widodo announced on Monday.

The long-touted new city would be located between the regions of Kutai Kartanegara and North Penajam Paser, near the port city of Balikpapan, a two-hour flight from Jakarta, Mr Widodo said.

Jakarta sits on swampland and is one of the fastest-sinking cities in the world. Parts of the megacity could be completely submerged by 2050, researchers say. The city is also nearing traffic gridlock and suffers severe pollution.

Euromonitor International, the market researcher, estimates that Jakarta will overtake Tokyo to become the world’s most populated city by 2030, when its population is set to reach 35.6 million.

Mr Widodo said the East Kalimantan site had been chosen for several reasons, including that the risk of natural disasters was “minimal, whether from floods, earthquakes, tsunamis, forest fires, volcanoes or mudslides”.

He is also keen to set up a new technology-focused city to address unequal wealth distribution between the island of Java, where Jakarta is located, and outer islands in the Indonesian archipelago.

The idea of moving the capital has long been discussed, but Mr Widodo’s government has said it hopes construction will begin by 2021, with government functions to start moving to the new city from 2023-2024.

The Indonesian leader asked parliament to sign off on the relocation plan earlier this month.

The new city is expected to cost Rp466 trillion (€29.5 billion), with funding coming from public-private partnerships, the private sector and state-owned enterprises.

Aaron Connelly, a research fellow focusing on south-east Asia at the International Institute for Strategic Studies in Singapore, said that while Mr Widodo seemed “more serious” about the move than his predecessors, the proposal deserved “continued scepticism”.

“This will be a massive undertaking and require broad consensus among Indonesian political figures. The president will need to spread the patronage around to get it done, which means it is unlikely to happen quickly or cleanly,” he said.

The project could potentially be discontinued by any successor to Mr Widodo once he left office in 2024, Mr Connelly said. The move was also unlikely to make Jakarta more habitable.

“Instead of facing up to the task of fixing Jakarta, with all its complex social ills, the president has decided to do a hard restart,” he said.

“But it will be seen in Indonesia as a nation-building legacy for [him], if he can pull it off.” – Copyright The Financial Times Limited 2019