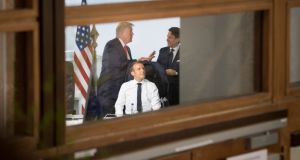 The leaders of Canada, France, Germany, Italy, Japan, the UK and US concluded an extraordinary three-day summit in Biarritz with what appeared to be significant progress on a few of the world’s greatest problems, in particular the crises that have pitted US president Donald Trump against Iran, over its nuclear programme, and China, over trade.

President Emmanuel Macron, who conducted the summit, announced that Iranian president Hassan Rouhani is prepared to meet with Mr Trump to seek a way out of the impasse over the 2015 Iranian nuclear deal known as the JPCOA. Mr Trump withdrew from the deal in May 2018.

“President Rouhani declared this morning that he was ready to meet [G7)]heads of state and government if it could be useful to unblock the situation, and President Trump said he was ready,” Mr Macron said.

The announcement brought to mind Mr Trump’s summits with the North Korean dictator Kim Jong-un, who nonetheless retains his nuclear weapons. Iran does not yet have nuclear weapons.

“I want this meeting to happen, and I want an agreement between the US and Iran… We can have it done in a very short period of time,” Mr Trump said at his closing press conference with Mr Macron.

Perhaps most importantly, Mr Trump said that “we are not looking for leadership change” in Iran.

Contrary to press speculation, Mr Trump was not “ambushed” by the arrival of the Iranian foreign minister, Mohammad Javad Zarif, in Biarritz on Sunday. “President Macron told me every step he was making. I didn’t think it was appropriate to meet [Zarif] but after the meeting he told me exactly what happened.”

Mr Trump praised Mr Macron’s handling of the summit effusively. “This is a truly successful G7. There was tremendous unity,” he said. “Nobody wanted to leave. We were getting along very well.”

The other six G7 members opposed Mr Trump’s hard line on Iran. Japanese prime minister Mr Shinzo Abe made several initiatives, Mr Macron said. The EU is a party to the JPCOA, and German chancellor Angela Merkel and UK prime minister Boris Johnson also tried to convince Mr Trump to work to expand the JPCOA rather than rescind it.

French commentators noted that despite the chummy relations between Mr Trump and Mr Johnson, the British leader was more aligned with EU than US policies throughout the summit. Mr Johnson expressed doubts about Mr Trump’s assertion that the UK could easily conclude a post-Brexit trade deal with the US.

Asked his opinion of Theresa May and Mr Johnson, Mr Trump said, “Poor Theresa May. I gave her my ideas. She chose to do it her way. It didn’t work out.” He said he has waited six years for Mr Johnson to become prime minister.

Mr Macron invited Mr Zarif to Biarritz only because the leaders reached a consensus on two points – that Iran must not obtain nuclear weapons, and that the stability of the region must be assured – over dinner on Saturday night. After meeting with Mr Macron for the second time in three days, Mr Zarif conveyed their invitation to Mr Rouhani.

Mr Trump called Mr Rouhani “a great negotiator” and credited US economic sanctions with persuading Iran to talk. “I think Iran wants to get this situation straightened out,” he said. “That’s based on gut. Their inflation is through the roof. Their economy is tanked entirely. The sanctions are hurting them horribly.”

Mr Macron said he would talk to Mr Rouhani within hours after the summit ended. “I am convinced an agreement can be reached,” the French president said. “I want to be cautious and modest but I think this is going to lead to an end to escalation.”

Mr Trump demands a longer timeframe for the JPCOA, which is due to expire in 2030. He also wants more sites to be put under surveillance.

Mr Macron said Iran would be rewarded with “economic compensation”. Mr Trump said there was no question of giving money to Iran, but the Islamic Republic might receive “short term letters of credit or loans secured by oil”.

The trade war between Mr Trump and China “creates uncertainty that disturbs markets. We saw this on different stock markets,” Mr Macron said. He satisfied Mr Trump by promising to reform the World Trade Organisation so that intellectual property is respected and conflicts are settled fairly.

Overnight from Sunday to Monday, China issued a statement saying it wanted to end the trade war. Mr Trump said he believed China was sincere. “I think they want a deal very badly,” he said. “I think they are very smart and I think President Xi is a great leader. He can’t lose three million jobs. It’s going to break the Chinese system… The US, which has never collected 10 cents from China will have collected $100 million in tariffs. They want a deal very badly.”

A reporter noted that Mr Trump called China the enemy one day, and praised it the next. “It’s the way I negotiate,” Mr Trump said. “It’s done very well for me over the years.”