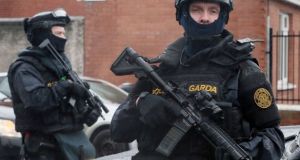 The Garda Síochána said the exercise is to examine the response to a simulated major armed incident. File photograph: The Irish Times

Anti-terror gardaí, supported by members of the Defence Forces, ‘killed’ a number of terrorists holding a hostage inside Shannon Airport on Tuesday, in a simulated incident designed to improve co-operation between both wings of State security and raise operational effectiveness in the event of a real incident.

In a scenario that is expected to be further refined in a follow-up exercise in the Autumn, the airport was imagined to be under attack from a doomsday cult who took over a part of the passenger terminal, taking hostages in the process and barricading themselves into a room.

The Garda, which has the lead role in such situations, responded via their Regional Armed Support Unit (ASU) and, from Dublin, the heavily-armed Emergency Response Unit (ERU), both special forces-type Garda units, were airlifted to Shannon with the help of the Air Corps.

Meanwhile, the airport perimeter was sealed and soldiers from the 12th Battalion Limerick set up road blocks at five pre-determined points around the airport.

The Naval Service secured the Shannon estuary close to the airport.

Five terrorists were imagined to be involved and, while the Garda attempted to negotiate a hostage hand-over, the scenario was accelerated by an assumed threat to their lives and so the room was stormed.

A number of terrorists were killed in the ensuing melee, while others were arrested.

Members of the Defence Forces’ bomb disposal unit had to examine the immediate area afterwards, as well as the arrested terrorists, for any threat of explosives.

The exercise lasted from about 2.30pm to 4pm, during which time, real passengers were diverted to another part of the terminal to minimise disruption.

Approximately 80 Defence Force personnel, from the three service branches, were involved with, it is believed, a similar number of gardaí.

Shannon Airport Police were also involved as was the airport authority, particularly in the planning phase.

Live joint exercises were directed last year by the Cabinet’s then newly-formed security committee to enhance preparedness for a major terrorist incident similar to those that have taken place in Brussels, Paris and London.

It is understood that an in-department assessment of the exercise will be held shortly (an instant assessment, or hot wash debriefing, was held immediately) so the co-operating forces can identify what worked and what needs improvement.