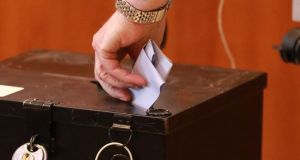 More than 126,000 young people aged 16 and 17 could vote in 2019 local and European elections under terms of a Bill being debated in the Seanad on Wednesday.

The Bill, which is supported by the National Youth Council of Ireland, would change lower the age limit for voting rights in European Parliament and local elections without recourse to a referendum.

However, a referendum would be needed to change the Constitution to allow 16- and 17-year-olds vote in Dáil and presidential elections.

The Bill is being progressed by Sinn Féin senators, including Fintan Warfield, who was nominated by the National Youth Council of Ireland and who is the youngest member of the Oireachtas.

Youth Council deputy director James Doorley said: “While we need a referendum to change the Constitution to extend voting rights to 16- and 17-year-olds for Dáil elections and Presidential elections, all that is required for the Local and European Parliament elections is a change in legislation.”

When the Bill was first presented in March 2017, the Government passed a motion providing for nine months’ public consultation on the proposed legislation. “That period of discussion and deliberation has now expired, it is now appropriate that the Bill should progress to the next stage,” said Mr Doorley.

He recalled the issue of a reduced voting age for local and European elections had been discussed since a youth council campaign in 2009.

“The Joint Oireachtas Committee on the Constitution held hearings and reported on this issue in 2010; following a commitment made in the 2011 Programme for Government, the matter was deliberated on by the Constitutional Convention in 2013; the Convention made a positive recommendation in favour of votes at 16; the then Government promised a referendum on the issue in 2015, then changed its mind. Therefore the current Bill - which does not require a referendum - was proposed,” said Mr Doorley.

In recent weeks the Oireachtas celebrated the 100th anniversary of the Representation of the People Act, 1918, which extended voting rights to women aged over 30 and with property of valued at more than £5, and to all men over 21 for the first time.

“It would be very fitting for Seanad Éireann as part of the Vótáil 100 commemoration to extend the franchise to the over 126,000 young people aged 16 and 17 years so that they can have a say in electing their local councillors and European Parliament representatives” Mr Dooley said.

More information about the campaign can be found at www.voteat16.ie.