Theresa May deluding herself on Brexit, says Juncker

Ahead of the triggering of Article 50 by Britain, European Commission president Jean-Claude Juncker has described Brexit as a 'tragedy'. Video: BBC 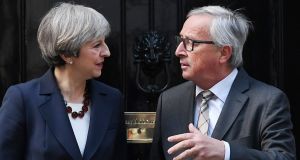 European Commission president Jean-Claude Juncker is reportedly more pessimistic about reaching a Brexit deal with the UK after a dinner with British prime minister Theresa May. Photograph: EPA

British prime minister Theresa May wants to negotiate with the EU in secret and thinks Britain should be able to opt in and out of parts of the single market after Brexit, according to a German newspaper account of her dinner last week with Commission president Jean-Claude Juncker.

A full-page report by Thomas Gutschker in the Frankfurter Allgemeine Sonntagszeiting describes in detail a disastrous meeting at 10 Downing Street, which left Mr Juncker convinced that Brexit talks have more than a 50 per cent chance of collapsing without a deal.

“I’m leaving Downing Street 10 times more sceptical than I was before,” he told Mrs May as they parted.

Mr Juncker brought along his chief of staff Martin Selmayr, and they had a drink with Mrs May and Oliver Robbins, who runs the Brexit department at Whitehall, before going in to dinner.

They were joined by Brexit secretary David Davis and the EU’s chief Brexit negotiator Michel Barnier and his deputy Sabine Weyand.

Mr Davis tried to break the ice by telling his European guests about a “vaunted act of heroism”, when he was a backbencher and Mrs May was home secretary, when he appealed to the European Court of Justice (ECJ) against British data retention legislation.

I think you underestimate that, Theresa

“His boss did not seem to be amused, however, about this episode which was not at all vaunted for her. The visitors asked themselves if Davis would still be in charge of the negotiations after the election,” Gutschker writes.

Mrs May said she would like to address the rights of EU citizens in Britain and British citizens in Europe as soon as the negotiations begin after the election on June 8th. She suggested that the two sides could resolve the issue at a summit in Brussels just two weeks later.

Mr Juncker said the EU agreed that the issue should be addressed early but suggested it would take more than two weeks to work out the details on issues like access for such citizens to each other’s healthcare systems after Brexit.

“I think you underestimate that, Theresa,” he said, taking two great piles of paper out of his briefcase. One was the EU’s accession treaty with Croatia, the other the Canada-EU Trade Agreement.

They run to thousands of pages and together weigh more than seven kilos and Mr Juncker said the British divorce agreement and a free trade deal would be just as lengthy.

Mrs May proposed that the negotiations should be conducted in four-day blocks every month and that everything should remain secret until the end.

The EU has already agreed to a “transparent” process, with the Commission publishing all negotiating documents immediately and checking back with the member-states and the European Parliament each step along the way.

The EU has been clear about the sequencing of the talks too, starting with the divorce settlement and only moving on to future arrangements such as a trade deal after sufficient progress is made on the first issues.

Mrs May called for this sequence to be reversed, so that the two sides would start talking about trade right away, leaving arguments about the divorce bill until the end.

“Let us make Brexit a success,” she said, describing her vision of a prosperous, outward-looking Britain, as closely integrated with the European single market as possible, without its obligations.

Mr Juncker told her he wanted good relations between Britain and the EU but that the outcome she envisioned was impossible. As a third country, outside the single market and the customs union, Britain would almost certainly be worse off than today.

“Brexit cannot be a success,” he said.

Apparently taken aback, Mrs May insisted that her vision was realistic, citing Protocol 36 of the Lisbon Treaty as a template for single market access.

“For Juncker’s people, an internal alarm went off. They had feared something like this beforehand, now it was happening,” Gutschker writes.

The more I hear, the more sceptical I become,

Protocol 30 allowed the UK and Ireland to opt out of all police and criminal justice measures but to opt in to any individual measures they chose.

As home secretary, Mrs May announced in 2014 that Britain was opting out of all the measures but would opt back in to 35 of them. Now she wants to take the same approach to the single market, opting out of its obligations, including free movement of people and ECJ oversight, but opting back into parts of it on a sector-by-sector basis.

“The more I hear, the more sceptical I become,” Mr Juncker told her.

Then Mrs May turned to Britain’s divorce bill, which the EU estimates could be as high as €65 billion. Mrs May said Britain did not owe the EU a penny, because there was nothing in the treaties about an exit bill. Her European guests pointed out that Britain had made financial commitments as an EU member-state which were legally binding.

Mr Davis said the EU would be unable to enforce their demands because Britain would have left and would no longer be under the jurisdiction of the ECJ.

In response Mr Juncker reportedly said ‘OK’, but then the other member-states would be unwilling to agree a trade deal with Britain.

Mr Juncker was so alarmed by what he heard from Mrs May and Mr Davis that he called Angela Merkel shortly after 7am the following day, telling her that the prime minister was living in a different galaxy and was deluding herself.

A couple of hours later, Ms Merkel told the Bundestag that the EU was firm in its approach to the Brexit talks, adding that “I have the feeling that some in Britain are under some illusions”.

Labour and the Liberal Democrats have pounced on the report of the dinner to warn that Mrs May and Mr Davis risk driving the Brexit talks over a cliff. After the dinner, Mr Juncker told aides he now puts the likelihood of the talks collapsing at “over 50 per cent”.

The leaking of a detailed description of the dinner is an unsubtle effort to influence the debate in Britain and push Mrs May towards what the Commission sees as a more realistic approach.

“Sometimes the alarm clock has to ring loudly until the deep sleep is over,” Gutschker writes.