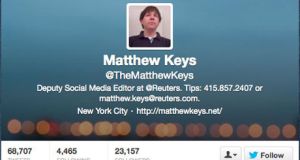 A federal grand jury in the US has indicted Matthew Keys, deputy social media editor at Reuters.com, for conspiring with members of the Anonymous hacking collective to break into the computers of his former employer, Tribune Company.

The indictment charged Mr Keys with three criminal counts, including conspiracy to transmit information to damage a protected computer.

The indictment said that he promised to give hackers access to Tribune Company websites and that a story on the Tribune's Los Angeles Times website was later altered by one of them.

Mr Keys did not respond to requests for comment. But several hours after the indictment was handed down, he tweeted: "I found out the same way most of you did: From Twitter. Tonight I'm going to take a break. Tomorrow, business as usual."

His attorney did not return a phone call seeking comment. A Thomson Reuters spokesman said the company was aware of the indictment and added: "Any legal violations, or failures to comply with the company's own strict set of principles and standards, can result in disciplinary action. We would also observe the indictment alleges the conduct occurred in December 2010; Mr Keys joined Reuters in 2012."

The company did not comment on Mr Keys's employment status. However, a Thomson Reuters employee at the New York office where Keys worked said that his work station was being dismantled and that his security pass had been deactivated.

The documents in the case paint a picture of a disgruntled former Tribune employee who fell in with some of the most notorious hackers in the country-and then worked with them, as well as against them.

The case began in early December 2010, when Fox 40, a Tribune-owned television station in Sacramento, California, received emails saying someone had claimed to have an internal list of employees, according to an affidavit for a search warrant submitted by Los Angeles-based Federal Bureau of Investigation agent Gabriel Andrews.

A former colleague suggested Mr Keys as a suspect, according to the FBI affidavit, because he had been terminated as an employee in October 2010 and then refused to hand over control of the Facebook and Twitter accounts he had run for Fox 40. Within weeks of the first suspicious email, the affidavit said Mr Keys told the same colleague that he had penetrated an elite chat group used by some of the most sophisticated members of Anonymous.

According to the affidavit, Mr Keys said he had learned of upcoming attacks on the Tribune's Los Angeles Times, eBay's PayPal and other companies. Two days later, a story on Latimes.com was defaced.

When Mr Keys learned that a member of the hacking group had changed the Times story, Mr Keys responded "nice," according to the indictment. Transcripts of the electronic chats excerpted in the affidavit and the indictment show someone using the nickname AESCracked offered to grant access to Tribune computers to others in the chat group.

"Let me see if I can find some other users/pass I created while there," he wrote after previous credentials were denied access, the indictment said.

The indictment says Mr Keys used the nickname AESCracked. The documents appear to show Mr Keys playing a double game for weeks before getting kicked out of the chat group. As a journalist between jobs, he took screenshots of the hacking group's chats and sent them to media outlets, he wrote later on a personal blog cited by the FBI.

He claimed credit for that work in a posting on his personal website in March 2011, writing: "I identified myself as a journalist during my interaction." But others in the chat room were furious at the leaks. The leading figure, known as Sabu, said on Twitter days later that Mr Keys was AESCracked and "gave full control of LATimes.com to hackers."

Sabu, subsequently identified as Hector Xavier Monsegur, was arrested later in 2011 and began cooperating secretly with the FBI while continuing to lead an