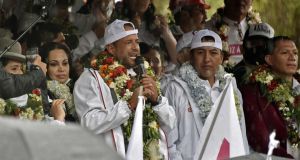 A year after its previous attempt ended in turmoil, Bolivia is set to try once again to elect a new president in an election that risks sparking renewed unrest in the troubled South American nation.

The vote on October 18th is to choose a permanent successor to Evo Morales a year after his attempt to win an unconstitutional fourth consecutive term as president unravelled. Morales, Bolivia’s first indigenous president, fled into exile after the army called for him to go amidst violent protests sparked by allegations of electoral fraud.

Since then political tensions have remained high even as the country spent months in lockdown that nevertheless failed to prevent it suffering one of the worst mortality rates in the world from Covid-19.

On the campaign trail candidates of all ideological stripes have faced intimidation and violence prompting the country’s Catholic church to join with the EU and Organisation of American States (OAS) in calling for calm ahead of voting.

Charged with overseeing the poll, which will also elect a new legislature, the administration of interim president Jeanine Áñez has embroiled itself in a series of controversies that have created a climate of political instability.

Adding to the fears of possible unrest, Morales’s Movement Towards Socialism (MAS) party claims only fraud can prevent its candidate, former economic minister Luis Arce, from winning outright on the first round.

“The MAS is saying if it does not win on the first round it will take to the streets. The situation is very tense,” says María Paz Salas, president of the Bolivian Association of Political Science in the capital La Paz.

Arce is the frontrunner as the campaign reaches its climax, a reflection of the loyalty of the MAS base. During its 14 years in power the party used the income from a commodities boom to pay for social spending that raised living standards in one of the region’s poorest countries, especially among the previously marginalised indigenous majority.

But the MAS’s rule became increasingly marked by authoritarianism and corruption, provoking the discontent which means the party can no longer muster the large majorities that Morales won during his first decade in office. In a 2016 referendum Bolivians rejected the idea of allowing him attempt a fourth consecutive term in office. Morales ignored the result of the plebiscite provoking further hostility.

So if the MAS is to enjoy a swift return to power, Arce will likely need to win 40 per cent on the first round and finish at least ten points ahead of his nearest rival, enough for outright victory. If he fails to do so he will face a run-off in which the fragmented opposition will likely unite against him. Already last month Ms Áñez abandoned her own presidential campaign in an attempt to consolidate the anti-MAS vote and prevent Arce winning on the first round.

Opinion polls are notoriously unreliable in Bolivia but currently point to a run-off between the MAS candidate and Carlos Mesa. A centrist who served as interim president between 2003 and 2005 he has positioned himself as the best equipped candidate to beat the MAS which he accuses of “having caused great damage to democracy over 14 years”. Trailing in third place is the far-right candidate Luis Fernando Camacho.

Mesa looked set to face Evo Morales in a run-off in last year’s presidential election before the MAS-dominated electoral authorities suspended the count. When it restarted Morales had pulled enough ahead to allow him claim outright victory on the first round. That led to resignations among electoral staff amidst allegations of fraud and demands from the EU that the contest go to a second round.

Morales agreed to an audit of the result by the OAS. But when this found evidence of “clear manipulation” civil unrest intensified and Morales fled into exile, first in Mexico and then Argentina where he now lives.

He claims he was the victim of a coup and MAS supporters have seized on analyses by some US academics that cast doubt on the OAS audit. The organisation has vigorously defended its conclusions which have been endorsed by other academics and the EU’s own observer mission whose report highlighted “a range of errors and irregularities” in the election process.

Since fleeing into exile Morales has been charged with a range of crimes back in Bolivia, from terrorism to the rape of an underage girl. He has dismissed the charges as part of a “dirty war” against him. In a recent report Human Rights Watch accused the interim Áñez administration of orchestrating a political witch-hunt against Morales and other MAS leaders.