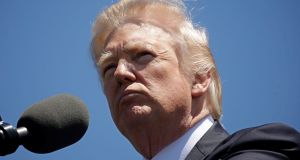 US president Donald Trump is embroiled in another scandal. Photograph: Kevin Lamarque/Reuters

On this week’s edition of World View, Washington Correspondent Suzanne Lynch reports on the latest scandal to embroil Donald Trump’s White House, as the US president defends his decision to release confidential information to the Russians.

Meanwhile, analyst Ellie Geranmayeh explains the issues and profiles the candidates in next weekend’s presidential election in Iran, where voters are unhappy that last year’s lifting of sanctions has yet to deliver much economically.

Isabel Gorst also reports from Russia on the massive protests in the streets of Moscow against the actions of Sergey Sobyanin, the city’s powerful mayor. Could the demonstrations be the start of a broader civic movement?

Get World View for free every week by subscribing in iTunes or listening to the podcast on Stitcher or Soundcloud.