Podcast: ‘It’s the most significant issue of our time’ 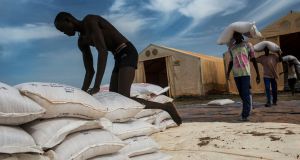 Despite this, the global response to this situation has been muted at best. The story has been largely ignored in the media, while the international community has failed to pledge anywhere near enough money to meaningfully tackle the crisis, according to the UN.

On today’s podcast, we talk to Ruadhán Mac Cormaic about the unfolding catastrophe and why the international community is failing the people of east Africa.

Also on the podcast, we talk to Guy Hedgecoe in Madrid about the controversy there over a never-before-used constitutional provision that may be deployed to block a referendum on Catalan independence.