Indonesian province may move canings away from public eye 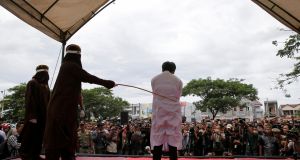 An Indonesian man is publicly caned on May 23rd in Banda Aceh, Aceh province, Indonesia, for having gay sex. Photograph: Beawiharta/Reuters

Two months after Indonesia’s most conservative province drew international headlines for publicly caning two young gay men for having sex with each other, the governor is considering making such whippings private to avoid negative news media attention and prevent any adverse impact on outside investment.

The proposed changes in Aceh province have caused a stir in Indonesia ever since local news media reported that Indonesia’s president, Joko Widodo, had met with the newly inaugurated governor, Irwandi Yusuf, to discuss ways to improve the province’s international image.

In an interview with local media, vice governor Nova Iriansyah said that because of the international attention on public whippings: “We will minimalise press coverage and conduct it inside prisons. Right now it’s in front of the mosque, right after Friday prayers.”

He added, “I think the national government is right that we have to do something.”

In a statement, the governor’s office emphasised the provisional nature of the discussions to end public canings, noting that the decision required approval from Muslim scholars and Aceh’s legislature.

Even as the Indonesian province considers moving the public floggings indoors, a highly conservative state in neighbouring Malaysia, Kelantan, passed a law allowing it to become the first state in the country to hold public canings. Currently, caning in Malaysia is conducted in private, often in prison yards and away from crowds.

On caning days in Aceh, huge crowds gather to watch as convicts are publicly beaten, an event resembling a medieval spectacle. Longtime critics of public caning said they were glad to hear that the punishment might be phased out. “It will mean nobody will be publicly humiliated anymore,” said Ratna Sari, the head of Women’s Solidarity, Aceh, a progressive group.

Still, she said, it was only a “small step forward” since canings would still be conducted, only out of sight.

Two men accused of having sex with each other were each sentenced in May to 85 lashes in public, the first case of people being punished for homosexuality in the province under a strict version of sharia, Islamic law. The sentences alarmed rights activists, who called the punishment a dangerous development in Aceh, a semiautonomous province on the northern tip of the island of Sumatra.

One of Indonesia’s poorest provinces, a legacy of the three-decade civil war with Jakarta, it has received comparatively little investment from Jakarta-based conglomerates.

Irwandi, the pragmatic new governor, won office with a pledge to develop energy and infrastructure, and to ensure that Aceh’s residents benefited from their province’s natural resources, which include some of Indonesia’s largest oil reserves. Some Acehnese politicians worry that investors from Jakarta and abroad are unnerved by news media portrayals of Aceh as an austere land where moral infractions are strictly punished.

The province, which was granted the right to establish sharia after ending the brutal civil war with the government in 2005, has imposed a strict version of the legal code of Islam. Efforts to change how sharia is enforced are very controversial in Aceh.

Hardline Islamist groups have called on Joko not to interfere in the province’s affairs, and the new governor is under fire at home for consulting with Jakarta on local sharia ordinances.

Still, this is not the first time that Irwandi has stood up to hardline Islamists. In a previous stint as governor, from 2007 to 2012, he refused to sign into law a version of sharia that mandated adulterers be stoned to death. Ultimately, Aceh’s department of sharia revised the criminal code and sent parliament a new version without the provision on stoning.

In Malaysia on Wednesday, Kelantan’s legislature, which is controlled by the conservative Pan-Malaysian Islamic Party, amended the state’s sharia code to allow public punishment. Caning is a standard penalty in the country, meted out by both secular and sharia courts.

Alia Affendy, communications officer for Sisters in Islam, a group that advocates for a progressive version of Islam, denounced the new law. A news release from the organisation referred to public caning as “a deplorable form of humiliation and shaming” that would build an “increasingly repressive environment”.

Alia said in an interview that the new law was part of a broader national effort by conservative groups to alter Malaysia’s legal code. “There is a big fundamentalist movement changing the law, not just at the state legislative level, but also at the federal level,” she said.

Malaysia, a multi-ethnic nation of 30 million people, has a population that is 60 per cent Muslim, though the country has large Chinese and Indian minorities who tend not to be Muslim. Politicians have been debating how public whippings would affect the country’s image abroad, with Mohamed Nazri bin Abdul Aziz, the nation’s tourism and culture minister, telling the news media that the whippings would not have an effect on tourism because tourists rarely visited Kelantan anyway.

Other politicians swiftly contradicted this assertion. “This can become a new Malaysian tourism product for Nazri to sell overseas so that non-Muslims, particularly those from developed nations, can see ancient and barbaric punishments being carried out in the democratic and modern Malaysia,” said Zainuddin Maidin, a former information minister, according to the local news website Malaysiakini.com.