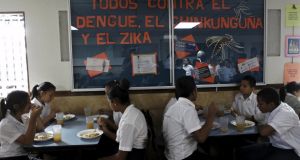 Schoolchildren in San José, Costa Rica, eat next to a noticeboard warning against Zika as part of a government campaign to prevent the spread of the aedes aegypti mosquitos . The words on the noticeboard read: “All against Dengue, Chikungunya, and Zika”. Photograph: Juan Carlos Ulate/Reuters

A new study of 42 cases of Guillain-Barré syndrome in French Polynesia offers the strongest evidence to date that the Zika virus can trigger temporary paralysis, researchers have reported. But experts cautioned that more evidence from other locations was needed to be conclusive.

Since last year, doctors have noticed an unusual increase in Guillain-Barré cases in several countries with Zika outbreaks, including Brazil, El Salvador and Venezuela. But as the World Health Organisation reported last Friday, a large number of those patients have not yet been confirmed through laboratory testing to have Zika.

Guillain-Barré leaves patients unable to move, in extreme cases forcing them to depend on life support. While most patients eventually regain full movement, the condition can be fatal. In the patients studied in French Polynesia, none died, but 38 per cent went to an intensive care unit and 29 per cent needed help breathing.

This study, published in the Lancet on Monday, used a number of tests to try to determine whether the group of 42 patients who contracted Guillain-Barré during a Zika outbreak in 2013 and 2014 also had the Zika virus. “This is a compelling paper that provides a good deal of objective data to suggest an epidemiological link between recent Zika infection and increased risk of Guillain-Barré syndrome,” said Dr Kenneth C Gorson, professor of neurology at Tufts School of Medicine, who was not affiliated with the paper.

Thirty-seven, or almost 90 per cent, of the patients in the study reported Zika-like symptoms four to 10 days before they started to notice neurological problems, such as an inability to walk or general muscle weakness. But determining whether the patients in fact had Zika was challenging. By the time they arrived at Centre Hospitalier de Polynésie Française in Tahiti during the 2013-14 outbreak, none of them still had active Zika in their blood. The virus stays in the bloodstream for only about a week.

So researchers used a gold-standard test to look for Zika antibodies. It entailed adding serum from each patient to live Zika virus in a culture, and then seeing whether the patient had antibodies to destroy the virus. All 42 patients had antibodies that killed the Zika virus. By contrast, only half of a control group of 98 people – matched for age, sex, and residence – had the antibodies.

“That’s huge, because it’s the first case-control study to establish a potential relationship between Zika virus infection and Guillain-Barré,” Dr Gorson said. Dr David W Smith, a professor of pathology and laboratory medicine at the University of Western Australia, cautioned that finding antibodies that neutralise Zika was not enough to prove an infection of Zika.

To do that, the test also must show that the concentration of Zika antibodies was four times higher than for dengue, also known as dengue fever, which is common in Tahiti, said Dr Smith, who was one of the authors of a commentary that accompanied the new study.

Only one of the 42 cases met that standard. Dr Arnaud Fontanet, one of three senior authors of the Guillain-Barré study, explained the results by pointing out that researchers had used blood samples taken in a three-month checkup, so the concentration of antibodies would have gone down. The scientists also looked for another type of antibody, called IgM, to see if patients had recently been infected with Zika. Thirty-one patients, nearly 74 per cent, had IgM antibodies against Zika, but none against dengue. By contrast, only 11 per cent of the control group had the dengue antibodies.

“If you put all this evidence together, for me, as an epidemiologist, I’m satisfied that Zika virus caused Guillain-Barré in those patients,” said Dr Fontanet, head of the Epidemiology of Emerging Diseases Unit at the Institut Pasteur in Paris.

Other experts said the study fell short of proving causation. “More studies are needed to demonstrate if Zika virus can really cause Guillain-Barré syndrome,” said Dr Bart C Jacobs, a professor of immunology and neurology at Erasmus MC in the Netherlands. Still, Dr Jacobs, who was not involved with the study, said it provided “convincing evidence for a link”.

The researchers were able to show that having had the dengue virus in the past did not enhance the severity of Guillain-Barré. A second control group of patients who had acute Zika in their blood, but no neurological complications, was recruited. When researchers compared the 42 paralysed patients with both control groups, they found that pre-existing dengue immunity did not vary significantly between the three groups.

Patients in the study both deteriorated and recovered more quickly than typical patients with Guillain-Barré. It usually takes one to two weeks for a patient to progress from the first symptom to intensive care, but in these cases, Dr Fontanet said it was four days.

“That’s very short,” Dr Fontanet said. Doctors are now being asked to be aware of the quick progression, and to test for the Zika virus in addition to other pathogens. “The point is, you have to watch them much closer,” Dr Gorson said. Dr Fontanet also urged hospitals to prepare more beds in intensive-care units, because the 16 paralysed patients in the study required special treatment for 51 days . One positive finding was that nearly 60 percent of the patients were able to walk without assistance only three months after they were discharged from the hospital.