What next for Isis? Terror group’s threat has not gone away

Since it entered the Syrian conflict, Isis has recruited an estimated 100,000 fighters 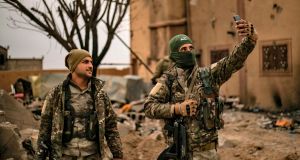 Although half of Islamic State’s foreign recruits may have been killed in action, survivors have dispersed and sprung up across the globe. Photograph: Delil Souleiman/AFP/Getty

The fall of the last pocket of Islamic State territory at the village of Baghouz in southeastern Syria does not signal the defeat of the terror group.

Since it entered the Syrian civil conflict in 2013, the cult (also known as Isis) has recruited an estimated 100,000 Iraqi, Syrian and foreign fighters for the campaign to carve out a territorial base stretching from Raqqa in Syria to Tikrit in Iraq and establish a 21st century “caliphate”.

Islamic State chose Raqqa for its capital as the city was the 8th century capital of the Abbasid empire during the golden age of Islamic civilisation. By contrast, Islamic State’s brief rule has been compared to the black days of the 13th century Mongol invasion.

Of 40,000 foreign recruits from 80 countries, almost half were from the Middle East and north Africa and the rest hailed from North America, Europe, the Russian Muslim republics, south and southeast Asia, Australia, New Zealand and Africa. About a quarter were women.

Although half the foreign recruits may have been killed in action, survivors have dispersed and sprung up across the globe, where they have mounted 4,300 attacks in 29 countries.

Captured and fugitive fighters and camp followers do not represent the total of Islamic State followers. During its rule over territory the size of Britain and 11 million people, Islamic State also won over subjects in spite of its perversion of Islam and its brutality. It is, therefore, impossible to estimate its residual hold over communities and individuals.

Governments that have regained control of Islamic State-held territory are deeply suspicious of surviving fighters and their families. Islamic State retains the spiritual support of tens of thousands. Despite the loss of its vast base, the brief existence of the “caliphate” has caught the imagination of men and women seeking to live in an “Islamic state” modelled on the entity founded by the Prophet Muhammad in 7th century Arabia. Evangelism by Saudi Wahhabi preachers, schools, television programmes and social media have promoted this vision and fealty to Islamic State.

The main cause of the quest for an “Islamic utopia” is alienation, which will not disappear with the fall of the Islamic State “caliphate”. Social, political and cultural alienation is rooted in corrupt and repressive governance, discrimination against Muslims in non-Muslim countries, poverty, unemployment and dead-end jobs, low standards of education, destructive western intervention, and the failure by the West to address Muslim grievances.

These grievances include Israel’s occupation of Palestinian territory and wars against Lebanon and Gaza, the ongoing US war against the Afghan Taliban and the 2003 US invasion and occupation of Iraq, the birthplace of Islamic State.

The Iraq episode was a seminal development. Marginalised, persecuted, and abused after the US installed a Shia fundamentalist regime in Baghdad, Sunnis responded by joining Islamic State and welcoming the cult into their towns and villages, providing it with its first territorial “emirates”. Deprived Syrian Sunnis could follow suit if US and EU sanctions deprive the country of the funds and raw materials to rebuild after eight years of devastating warfare.

Like other cult-type organisations, Islamic State exploits certain personal traits to gain recruits. It provides an identity to confused people who have failed to develop a sense of self. They find safety among group members and are prepared to follow orders and commit crimes in order to remain part of the group. Violence isolates them from societies that they have been convinced to despise.

Islamic State was the wealthiest of the world’s terrorist entities, and its “caliphate” had multiple attractions, including life in an “Islamic” environment, jobs, and security. Men joined to attain status as fighters and women as “jihadi brides”.

Calculating men sought multiple wives, slaves and property. Experienced fighters were well paid. Now they have been deprived of their livelihoods and perks, hundreds of fighters and some women could wage guerrilla campaigns to retaliate against their enemies.

Adherents who have remained at home, rather than travelling to war fronts in Iraq, Syria, Egypt, Pakistan, Afghanistan, Mali and Nigeria, as well as new recruits will continue to absorb Islamic State propaganda in radical mosques and gatherings and on social media, the dark web and Twitter.

A few can be expected to plan operations in their home countries and elsewhere and strike strategic or high-profile targets.