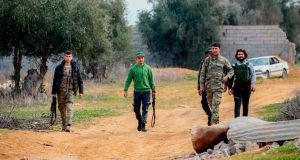 Fighters loyal to the internationally recognised Libyan Government of National Accord patrol an area south of Tripoli. Photograph: Getty

Libya’s fighting factions have embarked on a tenuous ceasefire in a nine-month war that has drawn in Russia and Turkey on opposite sides.

While officials from the Tripoli-based government and forces loyal to eastern military commander Khalifa Haftar accused each other of violating the peace on Sunday, violence abated after the accord took effect at midnight. Both sides said they will abide by the ceasefire.

The dramatic move from Haftar’s Libyan National Army, which had made a series of gains against the internationally recognised government in recent weeks, followed a call for a ceasefire by Turkish president Recep Tayyip Erdogan and Russia’s Vladimir Putin.

Some Russian mercenaries backing Haftar forces have pulled back from the front lines since the end of last year, according to several sources. But it is unclear whether their removal is a drawdown or part of a rotation, several sources said. A front-line fighter said the mercenary presence had visibly reduced.

How many dead in the conflict?

The war, which has claimed more than 2,000 people and displaced tens of thousands, threatens to further divide an oil-producing country wracked by violence since a Nato-backed revolt in 2011 toppled dictator Col Muammar Gadafy. As a gateway for refugees into Europe, Libya has been a vital issue for governments on the continent shaken by rising anti-immigrant sentiment.

Haftar has resisted ending his offensive, arguing that he could take the capital and unseat the government. International pressure had mounted as the war he launched in April drew in outside powers, including Turkish-backed Syrian rebels deployed to defend Tripoli. The United Nations mission welcomed the truce and called on both sides to adhere to it.

Hours before the ceasefire, Mr Putin talked to the leaders of Egypt and the United Arab Emirates, which also back Haftar, and reached out to Qatar which supports the Government of National Accord (GNA) in Tripoli. He also spoke to Mr Erdogan by phone, reaffirming their goal of a “political resolution” in Libya.

The US, which had held Libya at arm’s length until Russian mercenaries were deployed in September, increased pressure on both sides to end the fighting in meetings with Haftar and a GNA leader in Rome last week. – Bloomberg