Majority of easterners unimpressed with how democracy is practiced in Germany 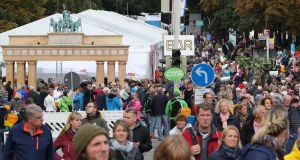 A model of the Brandenburg Gate in Kiel, northern Germany, where about 500,000 visitors are expected to celebrate German Unification Day. Photograph: Focke Strangmann/EPA

Germans are divided like never before over the legacy of their country’s unification as they marked nearly three decades as one country on Thursday.

Ahead of next month’s anniversary of the night 30 years ago when the Berlin Wall was breached by crowds of east Germans, marking the end of the territory’s failed Soviet-imposed socialism experiment, a new survey shows a majority of easterners are also unhappy with their experience of German democracy.

On Thursday chancellor Angela Merkel, raised in the vanished German Democratic Republic (GDR), admitted that much remained to be done on the road to uniting the country.

“German unification at state level is completed, the unity of the Germans . . . was not completed on October 3rd, 1990, nor is it to this day,” she said.

She urged western Germans to reflect on the setbacks many easterners experienced after 1989/1990, above all unemployment, when “after the burden of division, the full force of unification followed”.

The official unification ceremony in the northern port city of Kiel opened with Leonard Bernstein’s sparky overture to the musical Candide.

The musical choice, a nod to the local musical festival founded by Bernstein in 1987, brought unintended irony to proceedings.

Ceremony host Daniel Günther, state premier of Schleswig-Holstein, praised the courage of eastern Germans for going onto the streets against the regime.

“We want to remember the courage of 1989 and also call people to be more courageous once more today,” he said.

He urged people to ignore those who trade in panic and, without mentioning the far-right Alternative für Deutschland (AfD) by name, attacked its attempts to hijack the legacy of 1989 as a “mockery” of easterners’ achievements.

National surveys ahead of next month’s Berlin Wall anniversary paint a mixed picture of German unification.

Some 71 per cent of easterners and two-thirds of westerners say the hopes they linked to unification have been fulfilled, according to a survey carried out for Der Spiegel magazine.

A gloomier picture is visible in a survey for Die Zeit weekly, with just 52 per cent of easterners satisfied with how democracy is practised in the united Germany. Some 70 per cent believe decisions are made over easterners’ heads, with analyst Richard Hillmer pointing to Dr Merkel’s 2015 decision not to close the border to refugees.

“Doing this without any limitation . . . debate or vote in the Bundestag is viewed by many people as an arbitrary state action,” he said.

Some 59 per cent of easterners quizzed by Die Zeit think freedom of speech is just as limited – or even more limited – in today’s Germany compared to the GDR, while 70 per cent feel less protected against criminality.

The Zeit survey revealed the deep-rooted hurt of easterners, with 80 per cent convinced western Germans have never understood – let alone acknowledged – the dramatic adaptation required to survive after 1989.

Also visible in the Zeit survey are continued differences in political perspective left by four decades within Russia’s sphere of influence. Nearly half (48 per cent) believe coverage of Russia in Germany is too negative while 80 per cent believe relations with Moscow and Washington are equally important. That compares to 9 and 11 per cent who favour closer ties to the US and Russia respectively.

The far-right, by monopolising these themes and wounds, took 28 per cent in the eastern state of Saxony last month – a success it hopes to repeat on October 27th in the state of Thuringia.