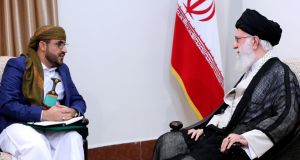 Iran’s supreme leader has held a surprise meeting with a senior Yemeni Houthi rebel official, marking a major change at the highest level in Iran’s stance toward the Yemen war waged by regional rival Saudi Arabia and the United Arab Emirates.

Tehran has, so far, given diplomatic backing but limited material aid to the Houthis, although they have been portrayed as Iranian proxies by the Saudis and their allies.

While there was no indication of how Iran might become more involved in Yemen during talks with Houthi spokesman Mohammed Abdul Salam, Ayatollah Ali Khamenei declared his “support for the mujahidah [struggle] for Yemen”, and accused Saudi Arabia and the Emirates of seeking “to divide Yemen”.

“This plot should be strongly resisted and a unified, coherent Yemen with sovereign integrity should be endorsed,” he said. He called for “domestic dialogue” and accused the Saudis and Emiratis of committing “war crimes” while the West exhibited “indifference”.

The US, Britain and France have hardly been indifferent. They have provided the Saudis and Emiratis with aircraft, tanks, weapons and munitions and logistical support for a war that has killed tens of thousands and displaced 3.3 million of 20 million Yemenis.

The encounter in Tehran coincided with the seizure by Emirati-backed southern separatists of the port city of Aden, seat of the Saudi-sponsored government. The leftist separatists have pledged to remain in control of Aden as long as the fundamentalist Islah party and northerners dominate the government. Emiratis and separatists regard Islah as an offshoot of their enemy, the Muslim Brotherhood.

“Giving up control of Aden is not on the table at the moment,” Saleh Alnoud, a Britain-based separatist spokesman told Reuters. Southerners want to govern themselves, he said.

“The Saudis need to make a decision,” he said. “Do they want to win the war against the Houthis? If they do, then they need to recognise [the Southern Transitional Council and allow it] to govern and manage the south.”

Separatist fighters have formed the backbone of Emirati forces fighting the Houthis, while the Saudis have conducted the air war. Separatists are determined to revert to the pre-1990 division of Yemen into two countries, north and south, while the Saudis, Houthis and Iranians insist on the unity of Yemen.

The fall of Aden follows an Emirati policy shift involving strategic troop withdrawal from Yemen and a meeting between high-ranking Emirati and Iranian officers to discuss the tense situation in the strategic Strait of Hormuz, through which 20 per cent of the world’s oil is exported.

The Emirati defection leaves the Saudis facing both secessionists and Houthis, who have been firing missiles into south Yemen and Saudi Arabia.

Bin Zayed wants out, leaving bin Salman, who cannot fight without the Emirates, to consider dialogue with Houthis, secessionists, jihadis and local warlords.