Talks to create military pact to take on Islamic militants 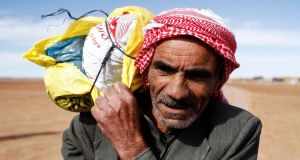 A Syrian refugee man walks after crossing the border to Turkey during fighting between Islamic State militants and Kurdish YPG fighters near Kobane, Syria, at Suruc district in Turkey today. Photograph: EPA

Egypt, Saudi Arabia, the United Arab Emirates and Kuwait are discussing the creation of a military pact to take on Islamic militants, with the possibility of a joint force to intervene around the Middle East.

The alliance would also serve as a show of strength to counterbalance their traditional rival, Shia-dominated, Iran.

Two countries are seen as potential theatres for the alliance to act, senior Egyptian military sources said - Libya, where Islamic militants have taken over several cities, and Yemen, where Shia rebels suspected of links to Iran have seized control of the capital.

The secret discussions reflect a new assertiveness among the Middle East’s Sunni powerhouses, whose governments, after three years of post-Arab Spring turmoil in the region, have increasingly come to see Sunni Islamic militants and Islamist political movements as a threat.

The US Arab allies’ consideration of a joint force illustrates a desire to go beyond the international coalition that America has put together to wage an air campaign against the Islamic State (IS) group in Iraq and Syria, in which Saudi Arabia and the UAE have participated.

The Egyptian officials said the alliance under consideration was not intended to intervene in Iraq or Syria, but to act separately to address other extremist hotspots.

Talks on an alliance against extremists were well advanced, the Egyptian officials said. But the further idea of forming a joint force is more distant and there are differences among the countries over the size of any force, funding and headquarters, and over whether to seek Arab League or United Nations political cover for operations, one official said. Past attempts at a pan-Arab military force have fallen apart.

But even if no joint force is agreed, the alliance would co-ordinate military action, aiming at quick, pinpoint operations against militants rather than longer missions, the officials said.

The countries have already shown an unprecedented willingness to intervene together. Egypt and the UAE co-operated in carrying out air strikes against Islamic militants in Libya during the summer, according to US and Egyptian officials, and last month Egypt carried out strikes of its own. Egypt’s government has denied both operations.

Egypt’s president, former military chief Abdel-Fattah el-Sissi, has warned repeatedly that Islamic extremists must be dealt with in multiple places, not just in Iraq and Syria. In a September interview he said “a comprehensive counter-terrorism strategy in the region” was needed.

Asked if the US was aware of the discussions, Pentagon press secretary Rear Admiral John Kirby said: “We’re not privy to that. I wouldn’t speak to it.”

The spokesman for Egypt’s presidency, Alaa Youssef, denied that creating a joint rapid deployment force, complete with a headquarters, was part of the “routine” discussions between Egypt and its Arab allies on a strategy to combat extremism.

The Egyptian military officials said top generals from the countries - including at times, their chiefs of staff - have held multiple rounds of talks. Two of the Egyptians said they had participated in the discussions, while the other two said they had been briefed on them.

Being considered, they said, was the establishment of a core force made up of elite troops with aircraft and access to a pool of intelligence gathered by members of the alliance.

To prepare for such a force, bilateral and multilateral war games have been held over the past year among the countries to promote harmony among their troops and weapons systems, the Egyptians said.

Egypt and Saudi Arabia, in particular, have elite counter-terrorism units, and the Gulf countries have sophisticated air forces, largely purchased from the United States.

The officials said Jordan and Algeria had also been approached to join.

“It will only be announced when it is ready to go and we have an agreement on everything,” said the most senior of the Egyptians.

The countries involved intend to get a “nod” of approval from the United States, the officials said. However, the idea of a joint force reflects scepticism among the countries that Washington is prepared to pursue militants beyond the anti-IS group operation, they said.

In Libya, Islamic militants have controlled the capital Tripoli and the second-largest city, Benghazi, for the past two months. Islamist politicians in Tripoli have set up their own government and revived the previous parliament, where they held a majority.

The internationally-recognised and most recently elected parliament and government have been relegated to the small city of Tobruk near the Egyptian border, while its allied militias and army forces under General Khalifa Hifter battle the militants. Mr El-Sissi and Saudi Arabia have backed the Tobruk government.

In Yemen, al Qaeda has one of its most active branches, fighting the government for years. Also, Shia rebels known as Houthis overran the capital Sanaa in September, threatening the rule of Gulf-backed president Abed Rabo Mansour Hadi. Saudi Arabia has intervened to fight the Houthis previously, in 2010, believing that the movement is a proxy for Iran.

Egypt and Saudi Arabia in particular have a close bond under Mr el-Sissi. As army commander, he overthrew Egypt’s Islamist president, Mohammed Morsi, who was democratically elected after the upheaval of the Arab Spring uprisings. Mr el-Sissi has since waged a ferocious crackdown on Mr Morsi’s Muslim Brotherhood, which Saudi Arabia and the UAE also see as their enemy.

Saudi Arabia, the Emirates and Kuwait have provided some $20 billion in aid to Egypt since the removal of Mr Morsi.

1 Coronavirus: More ‘striking’ evidence BCG vaccine might protect against Covid-19
2 Coronavirus: 25 more people die in the Republic; New Garda powers come into force
3 Coronavirus Q&A: What new powers have the gardaí been given?
4 This time, the future of the euro really is at stake
5 Micheál Martin raises need for ‘end point’ of coronavirus restrictions
Real news has value SUBSCRIBE